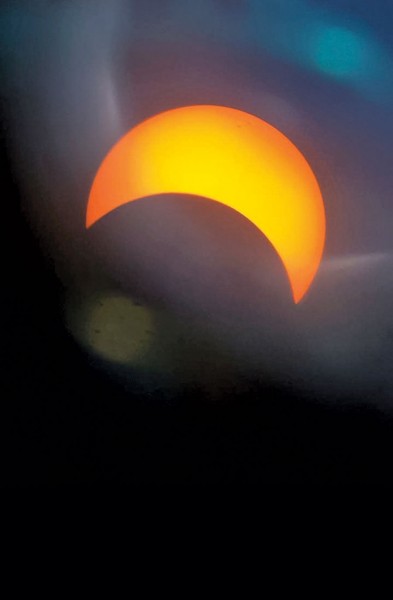 The View from Inspiration Point: Thoughts on the Solar Eclipse

Tom Burns will retire at the end of the school year after 34 years as a part-time professor of English and 25 years as director of Perkins Observatory.

My wife and I took the long way home after viewing the “Great American Solar Eclipse” in Stanley, Idaho. And thus it was that I stood with her a few days later in Grand Teton National Park on a rocky outcropping called Inspiration Point.

Inspiration is the first cry of my first-born child, Krishni, as she lay cradled in my arms just moments after she was born. Inspiration was my first total solar eclipse off the coast of the Baja Peninsula in 1991. How bitterly my then-7-year-old daughter cried when we left her at home. How fervently we promised that we would take her along to the next one.

Inspiration was the total phase of the 1991 eclipse. As I stared dumbstruck at the hole in the sky where the sun used to be and saw the iridescent corona encircling the sun like an excess of feather boas, my thoughts turned to my daughter. She must see this someday. Afterward at dinner, my wife, Susie, and I began to make plans for 2017.

Disappointment mixed with pride was my reaction to my daughter’s announcement of her appointment to a teaching position at the University of Illinois. Classes began soon after eclipse day, Aug. 21, and she was required to attend meetings for new faculty. I could not keep my promise to her.

But fortune is knowing that the university is but a three-hour drive from Carbondale, Illinois, the place along the path where totality would last the longest.

And so we stopped at her place in Urbana, Illinois, to drop off our dog. She had planned her sprint to Carbondale to perfection.

We bid her a sad farewell as we headed much farther west.

Uninspiring was the 2,000-mile drive to a primitive campsite near Stanley, Idaho — a bone-grinding, extended labor, the consequences of which only the weather gods knew.

And uninspiring indeed was the weather forecast for Idaho and Illinois, which shifted a dozen times from clear to cloudy and back again. Time and again, I checked the weather in Stanley, but time and again, thinking of my daughter, my iPhone took me to the forecast in Carbondale and to all the places along the eclipse path I knew my friends were waiting.

Deeply uninspiring was planning our bailout strategy if Stanley turned out cloudy. We would arise (if we had slept at all) at 1 a.m. on eclipse day and dash to the east to Rexburg, Idaho, or to the west to Lime, Oregon, population zero, the site of the long-defunct and decaying Portland Cement Factory, where we would experience the zombie apocalypse version of totality.

The sky was partly cloudy when we arrived two days before the eclipse at our campsite. We shared it with the extended family of Columbus Astronomical Society member Jim Schoultz. Jim’s wife, Marty, had reserved it a year ahead in anticipation of the event.

Jim’s family was only moderately excited about the event. Some of them were there mostly for the family reunion. Most of them had seen partial eclipses. “How much better could the totality be?” they asked.

I replied with writer Annie Dillard’s famous comparison of a partial and total solar eclipse: “It’s the difference between kissing a man and marrying him.”

They were for the most part unimpressed. “You’ll see,” I said.

Inspiring but exhausting was our pre-eclipse hike up the mountain to see Sawtooth Lake, a 10-mile round trip up to 1,700 feet. As we neared the summit, we passed a young woman with a huge backpack full of camera equipment. “It’s my second time up,” she said. “The first time was for my camping stuff.” Now that’s inspiring.

And as we came finally to the lake, we saw at least 200 tents placed in every conceivable tent location. Some of the campers had been there for a week, such was their ardor to see the most beautiful of natural events from one of the most beautiful places in America.

And abruptly inspiration hit us smack in the kisser. As we rounded a rock face, there was the crystalline-blue lake. Across from it was Sawtooth Mountain, a granite peak so high that not a single inch of it was below the tree line. It was all rock and snow pack set against the perfect blue of the lake below and sky above.

We wanted to stay to see the eclipse from there, but we lacked the necessary camping equipment. So down the mountain we went.

A quick trip into Stanley to check the weather confirmed our suspicions. Its population had swelled from 56 to over 10,000. The main eatery was a giant and temporary open-pit cookery with a badly spray-painted sign that read “Booze and BBQ.” Inspiring in its way, I suppose, but too crowded (and inebriated) for my taste. Back to our campsite we went.

As I arose at 5 a.m. on eclipse day, my heart sank as a heavy haze hung around our campsite. But as predicted, the sun burned off the haze. By 7 a.m. I was hustling solar-safe telescopes and binoculars out to our observing field.

And as the moon took its first bite out of the solar cookie and then the bite grew slowly larger, I imagined the shadow of the moon, just 70 miles wide, sweeping from west to east at 1,200 miles per hour across America.

And then, abruptly, the sun was consumed.

How can I find the words to describe the two minutes and eight seconds of totality? The sun’s feathery corona was dotted with red solar prominences, each one a gigantic explosion of outrushing gases larger than planet Earth.

The corona itself is a strange contradiction. The sun’s outer atmosphere cascades outward, pushed violently away from the sun by the solar wind at hundreds of thousands of degrees Fahrenheit. We see in it the force of the sun’s explosive, hydrogen-bomb power. How can anything so fierce be so ephemerally and delicately beautiful?

As our little group’s gasps and cries finally turned to total, awestruck silence, the first point of brilliant sunlight appeared surprisingly but as expected through a lunar valley.

“The diamond ring!” I cried, and the totality was over.

As the sun slowly reappeared, I sat in dazed silence for a long time by my telescope. I imagined the moon’s shadow darting down the eclipse path for my friends and family across the country to see. “Now Don in Wyoming. Now Brad in Nebraska. Now Krishni in Carbondale. Now Bob in Kentucky. Now Dave in Nashville. Now Al in South Carolina.”

And my heart flew to Carbondale. “Promise fulfilled,” I thought. Krishni and I stood apart by 1,500 miles, but that day we bathed our faces in unearthly light as we stood together in the shadow of the moon.

“We have to get going,” my wife said, snapping me from my eclipse reverie. “How’s the view? Are you inspired?”

“Nope,” I said, lying and hoping she did not notice the catch in my throat. “But it’s a pretty good view, all in all.”