David Caplan, professor of English, presented a keynote address, “On Erasure: Past, Present, and Future,” at an international conference, “New Poetries—New Poetics? Cultural and Aesthetic Transformations of American Poetry,” at the University of Konstanz in Konstanz, Germany. Of his presentation, Caplan says: “I talked about erasure poetry, poetry composed by erasing words from another text. Sometimes the texts are literary, other times they are political or legal. I discussed the technique’s development, current uses, and possibility.”

Michael Flamm, professor of history, created a 10-episode series on “How 1954 Changed History.” Recorded for Amazon and Audible Originals as part of “The Great Courses” series, the audio course takes listeners through the battle against polio, the Red Scare that gripped the nation, the domestic impact of foreign conflicts, and the groundbreaking case of Brown v. Board of Education.

Jeffrey Ford, part-time instructor in English, published two books: Out of Body, a 172- page novel from Tor.com/Pan Macmillan; and The Best of Jeffrey Ford, a short story collection from PS Publishing, U.K., January 2020.

James Franklin, professor of politics and government, wrote the article “Human Rights on the March: Repression, Oppression, and Protest in Latin America,” which was accepted for publication in International Studies Quarterly.

Lee Fratantuono, professor and chair of classics, published an article on Virgil in the Spanish classics journal Myrtia.

Jerry Goldstein, professor emeritus of botany and microbiology, along with student coauthor Aidan Shumaker ’20, published “Cinnamon Extract and Cinnamaldehyde Inhibit the Replication of T2 Bacteriophage in E. coli: Potential for Use in Antiviral and Anticancer Therapy,” in Research & Reviews: A Journal of Biotechnology, 9(3), 8–17.

Kellie Hall, director of the Early Childhood Center, and Katherine Glenn-Applegate presented “Nurturing Curious Minds: Asking Smart Questions in Science and Beyond,” at the Action for Children Teaching and Learning Conference on Nov. 2.

Vanessa Hildebrand, assistant professor of sociology-anthropology, published the chapter “Ethnography” in the book, Research Methods in Health Humanities. She cowrote the chapter with Eileen Anderson-Fye. The book was edited by Craig Klugman and Erin Gentry Lamb.

Sarah Kaka, assistant professor of education, published five articles and delivered two presentations. Her articles were: “Shrinking an Already Decreasing Pool: Potential Implications of edTPA Implementation,” in the Ohio Journal of Teacher Education, 33(2), 47–79, Fall 2019; “Administrators’ Insights into the Preparation and Performance of New Teachers,” in the Northwest Journal of Teacher Education, 14(2), Fall 2019; “Classroom Culture in the Social Studies Classroom: The Abilities of Preservice Teachers,” in The Councilor: A Journal of the Social Studies, 80(2), Fall 2019; “2018–2019 Ohio Council for the Social Studies Annual Survey Results,” in the Ohio Social Studies Review, 55(2), 4–5, Fall 2019; and “Cooperating Teacher Perceptions of Their Preservice Teachers’ Impact on Student Learning,” in Educational Research: Theory and Practice, 30(2), 75–90, Fall 2019. She made two presentations at the National Council for the Social Studies Annual Conference in Austin, Texas, in November 2019: She presented a book chapter, “First Amendment Rights and Speech: Views from Students on News and Social Media in Schools,” which appears in At the Schoolhouse Gate: Teacher, Student, and Administrator Perspectives on First Amendment Rights in Schools, in press; and she presented a session on “Using Ephemera, Monuments, and Museums to Teach Controversial Social Issues.” 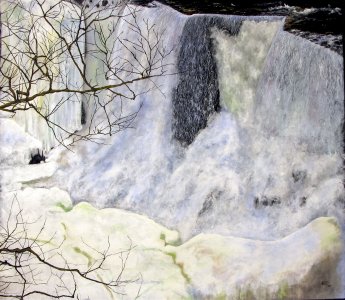 Marty Kalb, professor emeritus of fine arts, had one of his paintings purchased by the Columbus Museum of Art. The painting, Chagrin Falls Winter (pictured at right), is one of a series he made several years ago of waterfalls in Ohio, New York, and Vermont. The director of the museum, Nannette Maciejunes, saw the painting at an exhibition of Ohio artists at the Ohio Governor’s Mansion in July 2019. This image was placed incorrectly in the print edition of OWU Magazine. We apologize to Professor Kalb and readers.

Sean Kay, professor of politics and government, was recognized by the Keep Delaware County Beautiful Coalition, receiving the group’s Garrison-Brown Award for his volunteer work at the 2019 Northern Olentangy Watershed Festival, Olentangy River Cleanup, and Scioto River Clean Sweep. Over Thanksgiving Kay flew to Dublin, Ireland, to make a presentation on the 2020 U.S. presidential election. The event was sponsored by the Institute of International and European Affairs. Kay also published an article about his journey as an assistant guide through the Grand Canyon on the Colorado River, “An Old River Guide Learns New Tricks,” in Boatman’s Quarterly Journal (Winter 2019/20), the official journal of the Grand Canyon River Guides Association. As part of his research related to his newly developed course, Environmental Politics and Policy, he published an article delving into Ireland’s plans to divert the Shannon River, “Explaining Rainy Ireland’s Water Crisis,” in Irish Central, the largest Irish online magazine in the U.S. In March 2019, Kay was invited to present a paper on “Realism and Transatlantic Security Institutions” at the conference “What Is a Realist Foreign Policy?” held at the Mershon Center for International Security Studies at Ohio State University. The paper has been accepted for publication in Security Studies, one of the world’s top peer-reviewed international relations journals. It will appear in the May/June 2020 issue.

Chris Modica, assistant professor of psychology, authored two articles, one accepted and one in press. In press: “The Associations Between Instagram Use, Selfie-Activities, Appearance-Comparison, and Body Dissatisfaction in Adult Men,” Cyberpsychology, Behavior, and Social Networking. Accepted for publication: “The Association Between Body Surveillance and Body Satisfaction Moderated by Self-Concept Clarity in Adult Women in the United States: A Cross Sectional Study,” Journal of Women’s Health, Issues and Care, 8, 1-6.

Michele Nobel, assistant professor of education and director for special education, presented “Want to Travel the World With Your Class? You Can With Google Tour Builder,” at the Innovations in Teaching and Learning Conference, hosted by Franklin University, Oct. 18.

Robert Olmstead, professor of English, was recognized by the Ohioana Library Association, which selected his novel Coal Black Horse as one of 90 books by Ohio authors chosen to help the association celebrate its 90th anniversary.

Anne Sokolsky, associate professor of comparative literature, has been working since April 2019 as literature editor for the Journal of Japanese Language and Literature. Sokolsky also published a book review of Outcasts of Empire: Japan’s Rule on Taiwan’s “Savage Border,” 1874–1945, by Paul D. Barclay, in The Journal of Asian Studies. In October, she presented a talk, “The World of Travel as Presented in the Japanese Colonial Journal Taiwan Fujinkai, 1934–1939,” at the New York Conference on Asian Studies at SUNY New Paltz. Finally, she received a $3,000 Northeast Asia Council Japan Studies Grant for a project titled “Shigemitsu Mamoru and the Tokyo Trial in Literature, Film, and Personal Letters.” For the project, she will travel to Japan in May 2020 to study archives at the Mamoru Shigemitsu Memorial Museum in Kamakura, Japan, as well as film archives of the Tokyo Trial housed at the NHK library in Tokyo and Japan’s National Diet Library. These activities are financially assisted by the Japan-United States Friendship Commission and the Northeast Asia Council of the Association for Asian Studies. 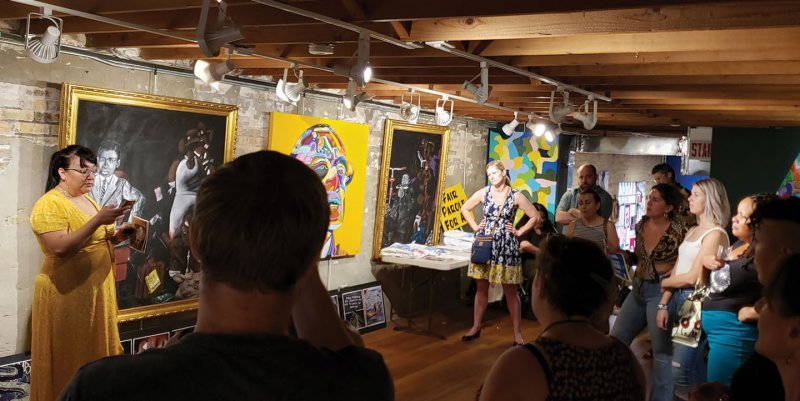 Shari Stone-Mediatore, professor of philosophy, was named managing director of Parole Illinois, an organization that she cofounded to educate people about over-incarceration in Illinois and the need for fair systems of release for people with long-term sentences. She was awarded $37,000 in funding from Circles of Justice Initiative, Sparkplug Foundation, and Crossroads Foundation for staff and operating expenses. She helped direct an auction of incarcerated people’s art (pictured above), the distribution of newsletters to 500 incarcerated members, a website (ParoleIllinois.org), the development of open and accountable communication practices among incarcerated and non-incarcerated board members, and the transition to official 501(c)(3) status. With her incarcerated colleague, Joseph Dole, she coauthored a news article about the organization, “Incarcerated Activists Raise the Bar on Parole.” Also, she is supervising OWU students Avery Newcom ’23, Scottie Hughes ’21, Athena Vakaleris ’22, and Genesis Canngieter ’20 in various Parole Illinois projects, including a report on expanded uses of clemency, the tracking of input from incarcerated members, and interviews with people with life sentences.

Chris Wolverton, professor of botany, coauthored the article “Comparison of Microgravity Analogs to Spaceflight in Studies of Plant Growth and Development,” which was published in Frontiers in Plant Science, Dec. 6, 2019. Wolverton also presented findings of his NASA spaceflight experiment in the President’s Symposium of the Annual Meeting of the American Society of Gravitational and Space Research in Denver, Colorado, Nov. 21.