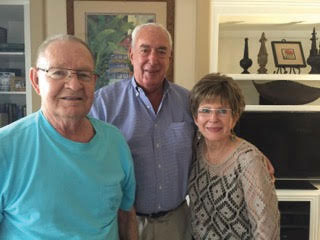 The late Richard “Dick” DeHaven ’60 was honored on Sept. 16 when Millikan High School in Long Beach, Calif., rededicated its football stadium to him, celebrating his championship-winning tenure as head coach of the football team. The tribute marked an emotional evening for many of his former players, who remember with deep fondness the formative role DeHaven played in their lives.

As a member of the OWU football team, DeHaven’s contributions were also legendary. As his dear friend Roger Lockwood ’60 puts it, “The man was the personification of the ideal student-athlete: humble, shy, appreciative, loyal, caring, dedicated, hardworking, sincere, fun. Dick’s dad, Jeff, who coached football in Sandusky, and his mom, Cora, instilled in Dick a sense of purpose (Dad) and a sneaky sense of humor (Mom) that integrated perfectly with Dick’s personality.” Roger adds that DeHaven’s marriage to Bette Lockwood ’61 is further testament to the steady and balanced life he lived. Indeed, his family was a source of true joy for him, and he took great pride in his three children, their spouses and his grandchildren. Pictured (from left): Dick, Roger, and Bette.