“Together, we’re going to stomp on the gas pedal of progress. We’re going to ensure that OWU’s best days are ahead of us, and nothing will hold us back but the extent of our own imaginations.” 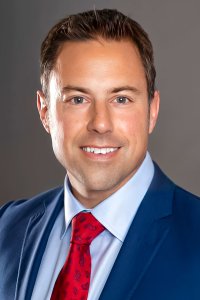 On Jan. 11, 2023, Ohio Wesleyan announced that Matt vandenBerg would become the University’s 17th president when he takes office July 1. vandenBerg comes to OWU from Presbyterian College, where, as one of the nation’s youngest college presidents, he led the work of the South Carolina-based college to redefine itself with distinction and propel its recognition in the higher education landscape.

“My life’s work focuses on championing small, independent colleges, on tackling the uncertainty they face, and on securing their current and future prosperity, particularly through bold thinking, innovative problem-solving, and strategic partnership building,” vandenBerg says.

Indeed, vandenBerg set his sights on becoming a college president while still an undergraduate at Alma College in Michigan. It was an “oddly specific goal,” he acknowledges, and one based on Alma’s then-president suggesting that he would flourish in the role while simultaneously fulfilling his desire for a meaningful career that would benefit others.

As vandenBerg prepares to begin his second college presidency at Ohio Wesleyan this summer, he brings an impressive record of accomplishment to draw upon as a Bishop.

A second college mentor taught vandenBerg the value of projecting confidence and, when warranted, even a little swagger.

Today’s students, he explains, expect small class sizes, mentoring professors, hands-on learning experiences, and good jobs after earning their degrees. To be successful in this highly competitive marketplace, colleges and universities need to do a better job of cutting through the “white noise” to explain clearly and confidently who they are and what they provide that prospective students won’t find elsewhere.

At Presbyterian College, vandenBerg’s accomplishments include:

As for Ohio Wesleyan, vandenBerg credits the campus faculty, staff, students, alumni, and leadership with working together to keep the University moving forward.

“We have the tools to win in today’s competitive landscape,” he says of OWU. “We’re an engine of social mobility for our region and our state; we’re one of America’s most entrepreneurial colleges; we’re one of the best bargains in American higher education; we are primed to play a critical role in the growth of Columbus.”

Prior to joining Presbyterian College, vandenBerg most recently served as the vice president for advancement and external relations and as the vice president for advancement at Alma College, as the associate vice president for development at Albion College in Michigan, and as the assistant dean for development and alumni relations at the Indiana University School of Informatics and Computing (Bloomington and Indianapolis campuses). His background also includes working for more than a year as a legislative assistant and deputy press secretary for former U.S. Rep. Pete Hoekstra of Michigan.

During vandenBerg’s six years at Alma College, his accomplishments included:

For his fundraising work, vandenBerg earned 14 advancement awards from Council for Advancement and Support of Education (CASE) in four years.

vandenBerg holds a Doctor of Education (Ed.D.) in higher education management from the University of Pennsylvania, where his dissertation earned CASE’s 2019 John Grenzebach Award for Outstanding Research in Philanthropy for Educational Advancement and he conducted and presented original research at Peking University in Beijing, China.

He holds a Master of Public Affairs degree with concentrations in nonprofit management and public policy analysis from the Indiana University School of Public and Environmental Affairs. vandenBerg also holds a Certificate in the Principles and Techniques of Fundraising from the university’s Lilly Family School of Philanthropy.

Ohio Wesleyan’s incoming president also is a Certified Fund Raising Executive (CFRE), and in 2020-2021, he was selected as one of 35 cabinet officers from across the country to participate in the American Academic Leadership Institute’s Executive Leadership Academy, a yearlong senior leadership development program. vandenBerg also holds certificates for completing both Harvard University’s Seminar for New Presidents and Peking University’s Higher Education in China program.

He and his wife, Melissa, have two children, Jackson, age 10, and Sylvia, age 6, and a 1-year-old golden retriever named Penny.