Ohio Wesleyan University’s Richard M. Ross Art Museum is a vital learning and resource center committed to providing exhibitions of distinctive quality and content, stewardship and growth of its Teaching Collection, and lectures and educational support while embracing the concept of transforming theory into practice for students, faculty, and the wider central Ohio community.

The Richard M. Ross Art Museum resides in Humphreys Art Hall. The building is named in memory of Sallie Thompson Humphreys, a professor in the Department of Fine Arts from 1905 to 1943. In addition to Sallie’s teaching responsibilities, during many of those years she served as chairperson of the department. 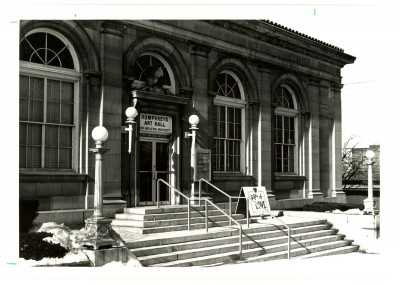 Prior to its acquisition by Ohio Wesleyan in 1969, the building housed the Delaware post office. The University modified the interior space to accommodate several components of the Fine Arts Department, including faculty offices, a gallery, and studios where classes were taught.

In 2000, the Fine Arts Department left Humphreys Art Hall and moved into newly renovated space in Edgar and Haycock halls. During the next two years, Humphreys Art Hall underwent the extensive renovation, with funding support from Elizabeth M. Ross, which resulted in the creation of the Richard M. Ross Art Museum.

The museum opened to the public during fall 2002, and OWU celebrated the official dedication of the museum one year later. 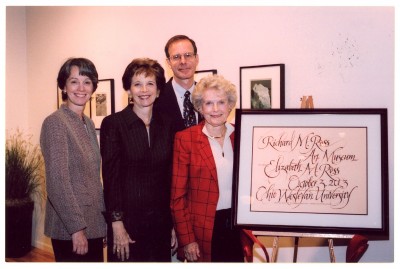 The Richard M. Ross Art Museum is dedicated by Elizabeth M. Ross on October 3, 2003, in loving memory of her husband and as an expression of her faith in Ohio Wesleyan University and the role of the visual arts in a liberal arts education.

The Richard M. Ross Art Museum continues to be a venue with few equals in central Ohio.

The museum is handicap-accessible, and admission is always free.