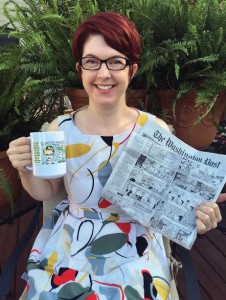 Abbey Powell ’96 is a public affairs specialist for the USDA’s Animal and Plant Health Inspection Service, working with plant biologists, entomologists, policy experts, and regulatory officials to promote their mission of safeguarding American agriculture and securing safe U.S. agricultural trade. “Yes, I talk about bugs all day!” Powell says. “But I’m also here as a ‘change agent,’ as OWU expects their grads to be.”

Powell is changing the conversation about invasive pest issues, and she’s doing so in unexpected ways. In fact, she has been re-created as a cartoon character in the nationally syndicated “Mark Trail” comic strip. Named “Agent Powell,” her character has raised awareness about the Emerald Ash Borer beetle, as well as imported red fire ants. As both an employee of the USDA and as “Agent Powell,” she believes the conversation is an important one. “Each year, invasive species cost the United States about $120 billion. Since they originate from other countries and have few or no real natural enemies here, they can quickly spread.” Pictured here, she holds a picture of an edition of The Washington Post comics page in which she is featured, as well as a mug featuring the comic strip.