Thomas C. Cecil ’52, has been a self-proclaimed “Lincolnphile” since he was a boy and heard stories about Abraham Lincoln from his father, Judge Lester Cecil, a Lincoln scholar. Earlier this fall, Thomas Cecil fulfilled a dream as he watched the unveiling of a new Lincoln statue in downtown Dayton.

Cecil was the driving force behind the 11-foot statue commemorating Lincoln’s delivery of an anti-slavery speech in Dayton’s Courthouse Square while on the campaign trail in 1859. The statue was unveiled Sept. 17, on the 157th anniversary of the speech. 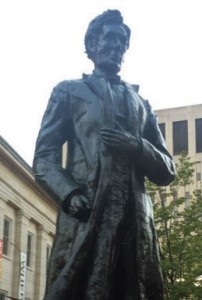 Cecil founded the nonprofit Lincoln Society of Dayton in 2003, and the organization received endorsement from the national Abraham Lincoln Bicentennial Commission in 2014. The society raised more than $250,000 to commission a bronze statue created by sculptor Mike Major, the first artist-in-residence for the Ohio Arts Council and National Endowment for the Arts. The society is currently raising funds to light the statue. “The Lincoln Society of Dayton would not exist without the dream of Tom to find a way to create a statue of Abraham Lincoln in honor of his speaking here,” says Maribeth Graham ’55, vice president of the society. The society’s 100 members also include Ben Graham ’52 and Martha Hibbert Boice ’53.