To Infinity, and Beyond 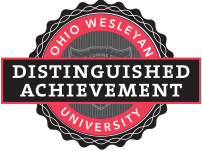 For James “Jim” Oberg ’66, Ohio Wesleyan University was a launching pad, starting him off with a degree in mathematics and fueling a lifelong passion.

“I was learning how to learn,” Oberg says about his Ohio Wesleyan experience. “It’s basically a passion that has remained all my life.”

Fulfilling the University’s mission to create students with well-rounded interests, he developed a hunger to learn new things and share them with those around him. And share he has. “I’m one brick in a large building of space exploration,” Oberg says. “But I’ve opened up some special windows into secrets of space flight with the historical research I did.”

The recipient of Ohio Wesleyan University’s Distinguished Achievement Citation (DAC), Oberg has 1,000 published journal and magazine articles, 29 UFO debunkings, 10 published books, 22 years with NASA, and two master’s degrees (from Northwestern University in applied mathematics and from the University of New Mexico in computer science). He is also fluent in four languages. He now lives on a ranch in rural Galveston County, Texas, with his wife Alcestis and “fine herb gardens, orchards, a miscellaneous collection of dogs, cats, and horses, and an often grand view of the sky,” he says. They have two sons and four grandchildren.

Oberg says OWU was his “home away from home” and taught him how to work productively with both like-minded people and those with whom he didn’t always agree, which served him well in his professional life.

Oberg was awarded the DAC for his work with NASA and his freelance work on the study of space. He has freelanced for NBC, ABC, United Press International and MSNBC. PBS made his book Red Star in Orbit into a documentary series in 1991. It is considered a groundbreaking study of the Russian space program from 1957 to 1981.

“I always wanted to be a rocket scientist,” Oberg says. “I was inspired by science fiction and newspaper articles of the 1950s describing the new age of exploration.”

Internationally, he is a Fellow of the British Interplanetary Society and, in 1993, he was invited to be the first foreign member of the Russian Academy for Cosmonauts. He’s also recognized as an expert on the Russian and Chinese space programs.