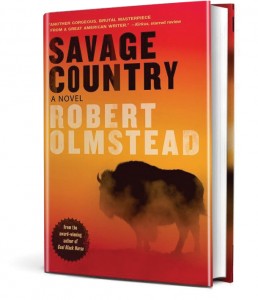 Professor Robert Olmstead’s newest novel, Savage Country, is earning reviews that are anything but savage. The professor of English and director of Ohio Wesleyan’s creative writing program is drawing raves on the heels of his previous novel, Far Bright Star (Algonquin Books, 2010), which was named one of the top 10 Westerns of the decade by Booklist.

Savage Country (Algonquin Books, 2017) features Olmstead’s first female protagonist, the widow Elizabeth Coughlin, seeking her independence in 19th-century America through a buffalo hunt in a desperate attempt to pay off her late husband’s debts. The book is driven by historical themes of economic exploitation and industrialization and is set in a post-Civil War nation that is just beginning the process of Reconstruction.

The author tells Kirkus Reviews: “I was attempting to get back to some kind of 19th-century authorial distancing in the writing of the novel.” He believes the work is his most somber since 2007’s Coal Black Horse, and he drew from Kenneth Roberts’ Northwest Passage, a book that inspired him as a writer when he was a child.

Olmstead wanted to deconstruct the mystery often surrounding Reconstruction in American history classes. “In my schooling,” he tells Kirkus, “we studied the Civil War and then jumped to World War I, as if nothing happened of importance in between.”

A sample of praise for Savage Country: