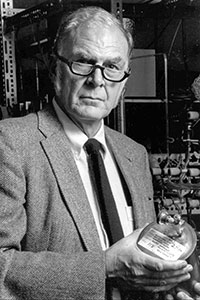 Sherwood Rowland graduated from Ohio Wesleyan University in 1948, where he was a member of Delta Tau Delta, the basketball team, the transcript staff and much more. He majored in chemistry, math and physics and after his time at OWU, he went on to receive a doctorate in Chemistry at the University of Chicago. There he began to study chlorofluorocarbons (CFCs). His research led to immense discoveries in the field including that chemicals in aerosol sprays, air conditioners and foam insulation were causing irreplaceable damage to the oxygen layer surrounding the earth’s atmosphere.

After this tremendous finding Rowland was awarded the Nobel Prize in Chemistry. We are celebrating the 20th anniversary of Sherwood Rowland’s award this year and remembering that his history ran through Ohio Wesleyan University and Delaware, Ohio.