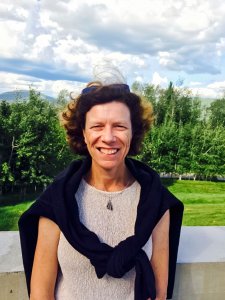 In 1989 she earned a master’s degree in international education from Harvard University. Raised in a home filled with Asian art collected by her grandfather George E. Sokolsky, she was inspired to teach high school English through the Japanese government’s Exchange of Teaching Program. Enamored with the culture, she decided that Japanese was the language to which she would devote the rest of her life studying. Prior to graduate school she lived in Tokyo and Kodera-cho. In 1994 she was accepted into the University of California Berkeley’s Ph.D. program in Japanese. During graduate school, she received a Fulbright Dissertation Research Abroad Fellowship to work on her dissertation in Japan. After graduating from UC Berkeley in 2003 with a Ph.D. in Japanese and a subspecialty in women’s studies, she taught at UC Santa Barbara and the University of Southern California. In 2006 she joined the Humanities-Classics Department at Ohio Wesleyan University. Her beloved canine Chester could be seen roaming the halls of Sturges in his Tale of Genji kimono to the delight of her students and colleagues.

At Ohio Wesleyan, she taught a wide range of courses, including Bad Girls of Japan, Myths of Asia, Freedom and Constraint, Literatures of the Silk Road, and Myths of the “Oriental Woman.” Most recently she created Money Talks: Women, Literature, and Economics in honor of her late colleague Dr. Sally Livingston.

She has numerous articles, honors, and fellowships to her credit. Her book From New Woman Writer to Socialist – The Life and Selected Writings of Tamura Toshiko was published by Brill in 2015. She has been the literature editor for the Journal of Japanese Language and Literature since 2019 and is on the executive committee of the Midwest Japan Seminar.

At Ohio Wesleyan she served on Faculty Personnel Committee, Academic Policy Committee, and Committee on Women and Gender. Her courses supported the Women and Gender Studies, East Asian Studies, Film Studies, and Middle Eastern Studies programs. She also served as fellowship director for the Honors Program. In 2018 she was made an honorary member of Ohio Wesleyan’s Eta Chapter of Phi Beta Kappa.

In Delaware, she has served on the board of the Central Ohio Symphony and volunteered with Habitat for Humanity and Bark Til Dark dog park.

Her future projects include a monograph on divorce in Japanese literature and a biography of her grandfather, journalist George E. Sokolsky, the reason she became an Asia scholar.