Julia Blyth ’10 parlayed the skills and experience gained through working in the OWU Natural History Museum into her current role as Collections Manager for the Maria Mitchell Association in Nantucket. 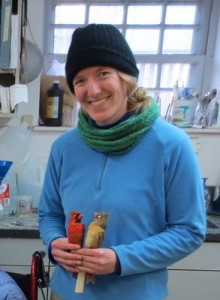 Today I am on a small island, preparing an Upland Sandpiper as a study skin for a museum’s collections. After the specimen was finished, I transferred a few fish preserved in formalin into ethanol for long-term storage.

Tomorrow, I plan to add new specimens collected by botanists from one of the island’s land trusts into the herbarium database.

In the spring, I will orchestrate a move of the entire collection into a new facility. I think of the path that led me here and prepared me for each of these tasks.

When I was a freshman at Ohio Wesleyan, Dr. Burtt saw what I did not – that I could become skilled at study skin preparation, and could be put to use in the Ohio Wesleyan Natural History Museum. I was uncertain about what I wanted to do with my life and only moderately squeamish at the time, so I didn’t resist.

Jed installed me under the tutelage of Sarah Manor, a junior at OWU and a skilled preparator of study skins, and basically set me loose.

Jed occasionally corrected my ideas about how to measure something properly, complimented skins that looked mostly like birds, and pointed out that certain study skins I’d prepared looked a bit more like darts, suggesting that I plump up future specimens a bit.

The OWU collection is regularly used, specimens being taken out to illustrate classes, for “bird quizzes,” or to study feathers and fitness based on color pattern (as with male House Sparrows’ black bibs).

When Sarah graduated, Jed found more students interested in the process to hire. The three of us student-curators took on many of the day-to-day operations of the museum, with just enough oversight to keep us from wrecking something priceless.

Together, we built several new displays in the public portion of the museum.

In one case, I remember that someone had commented on some of the tags falling off of the old display, and as we went to spruce it up a bit, Megan stumbled upon some shells in a cabinet that she thought ought to be seen by a few more people.

Soon enough, we were dusting shelves, typing up display labels, and carefully placing the found specimens in an attractive pattern. ...

Egg on His Face

One day in doing field observations for our Ornithology class, my friend and co-worker, Will, found some abandoned Canada Goose eggs. He’d been watching the nest for a while, and was pretty sure that they weren’t viable.

He collected the eggs in a paper cup, intending to blow them and add them to the collection the following day. Between homework and whatever else gets in the way of things during college, he forgot about them.

About a month later, I started noticing a particularly bad smell whenever I opened the museum door. A week or so after we first noticed the smell, we started looking for its source. The paper cup was sighted on a shelf above the workbench, and Will’s face got that “oh-crap-I-don’t-want-to-admit-what-I-just-remembered” look. …

In my senior year, we acquired some new to us, old cabinets – left-overs from the Smithsonian’s move into new cabinets. This enabled us to do a little re-arranging and space out some of the crowded drawers, which nicely coincided with development of a digital database and spurred on an effort to synchronize our collection with more currently recognized taxonomic order.

The task given to us, Will, Megan, and I set off to accomplish it. We first used our new digital database, along with the IOC World Bird List to arrange our specimens in their new taxonomic order.

We chose a Saturday when we expected the science center to be relatively empty and the three of us carried into the atrium many drawers, each full of acid-free trays, each of which contained one to many specimens of a single bird species.

Will slowly read off the list we’d prepared, species by species, starting with the herons and then ducks, and he listed the number of specimens of each recorded in the database.

Megan and I searched the floor for the right tray and checked for the number of specimens, accounting for each and making note of anything amiss to track down later. Then we carried them in and slid them into their new places. …

Now, as the collections manager at the Maria Mitchell Association’s Natural History Museum on Nantucket, I use every aspect of the skills I learned and practiced at Ohio Wesleyan.

I take care of and add to all collections here: Ornithology, Mammalogy, Entomology, Icthyology (fish), Herpetology, as well as a Herbarium.

My time as a student-curator gave the idea to apply for a museum internship, and the skill set to be successful. That experience led to this rewarding job caretaking the collections of a small museum.