With new initiatives welcoming students and faculty, and an effort to digitize the entire collection online, the Ross Art Museum is sharing its art-for-all sensibility with campus and the community. 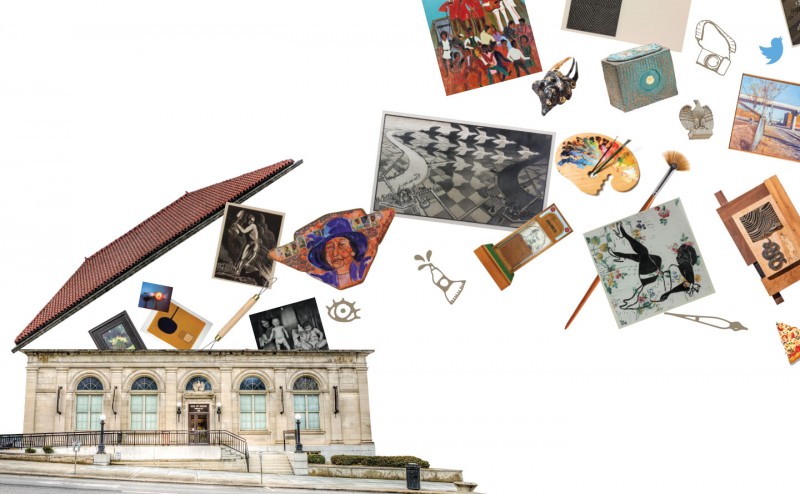 Nancy Comorau was stunned when the director of Ohio Wesleyan University’s art museum asked her to curate an exhibit. Comorau is an associate professor of English at OWU with a specialty in post-colonial literature and particular interest in black British literature. Art is not her forte.

But Erin Fletcher was insistent. The project would stretch Comorau’s teaching chops and, better still, draw students who aren’t art majors into the museum. “Just because you’re not an art major doesn’t mean the art museum isn’t open to you,” says Fletcher, who is in her second year as director of the Richard M. Ross Art Museum.

“I want a museum that makes students feel comfortable and welcome, to have meaningful opportunities to get a broader understanding of how arts can apply to many disciplines,” Fletcher says.

But in its 16th year and under Fletcher’s direction, the museum is becoming more recognizable, more integrated into campus, and more accessible beyond Delaware as the entire collection is put online. Fletcher hopes that soon every OWU student will have seen an exhibit, gone to a yoga class, relaxed before finals, or met for class in the museum.

“It’s really a hidden jewel,” says Sally Harris ’76, a member of the museum’s advisory board, whose time on campus predated the Ross. The building, at the corner of Sandusky and Spring streets, was known as Humphreys Art Hall then and housed art classes, offices, and an art gallery. Before that it had been the Delaware city post office until OWU acquired it in 1969.

The idea of a University museum had been percolating since 1972, when then-OWU art Professor Justin Kronewetter persuaded a loyal alumnus and two New York-based art collectors to donate the initial works for an art teaching collection. As the decades passed, the collection grew until finally, in 2002, it had its own home at the Ross.

That came about with a sizable donation from central Ohio philanthropist Elizabeth M. Ross, who provided enough renovation money to create two main galleries, two hallway galleries, and two offices on the museum’s first floor. Neither Mrs. Ross nor the museum’s namesake, her husband Richard, attended Ohio Wesleyan or lived in Delaware, explains assistant museum director Tammy P. Wallace ’02. But their strong passion for photography – Mr. Ross was a photographer in his own right – and an appreciation for art led Mrs. Ross to honor her late husband with the donation.

“College and university museums such as the Ross are a vital part of the museum community and provide a different kind of learning experience,” says Nannette Maciejunes, executive director of the Columbus Museum of Art. “The Ross Museum is known for presenting work by regional artists, which adds to the rich tapestry of art offerings within the larger community.”

“It’s pretty amazing that a small liberal arts school can have such a collection,” says Harris, who lives in Greenwich, Connecticut, and also is an Ohio Wesleyan trustee. “Students can see these pieces up close and personal.”

The museum’s advisory board, made up mostly of alumni such as Harris, is working to ensure that the museum is a vibrant part of a student’s OWU experience.

Christopher Shanley ’17 interned at the museum before graduating in December and wishes he’d gotten familiar with the museum sooner. He knew little about the museum until his junior year, when he took Fletcher’s Art 492 class, Exhibition Practice, to supplement his major in medieval studies. “I had no connection with the museum before taking that class, except that I had been in there once or twice for exhibits,” he says. “It’s really a fantastic resource for students on campus to have this great museum. I really wish I’d figured that out earlier.”

Helping students figure it out is a priority for Fletcher. She recruited a student advisory board and plans events with Wallace to draw in students. One such event was a studentonly “sneak peek” reception for an upcoming exhibit last fall. “It created a more welcoming, casual environment where the students were still surrounded by art but not by professors asking them questions,” Shanley says. “That can be a little intimidating.”

The student board also helped organize a successful holiday “de-stress” event before finals in December, at which students could get their hands on Play-doh, do yoga, and enjoy free food. “Some just came for the Chipotle, but some stayed and enjoyed the art,” Shanley says. “It was a definite good step in the right direction.”

Thalia Sallas-Brookwell ’20 is a gallery assistant and member of the student board. “There’s still a percentage of people on campus who might not know it’s there,” says Sallas-Brookwell, who is majoring in art history and women’s and gender studies. “So we’re trying to have more events, more class meetings, and more collaborative exhibits here.”

Fletcher hopes that Comorau’s exhibit, tentatively called “Culinary Roots and Migratory Routes,” also will expand the museum’s reach. It will tell the story of how the food that immigrants eat influences the places where they settle, and how immigrants are involved in everything from growing and harvesting crops to integrating their food culture into their new homes through restaurants and markets.

“This is way outside of my comfort zone, and it’s a bit scary,” says Comorau. “But I think students will be able to see how ideas they’ve read about can come out in works of art, and I hope this will make them rethink all kinds of stories around immigration.”

Professor of fine arts Jeff Nilan will have his first exhibit at the Ross alongside Comorau’s. Both are intended to go beyond engaging the campus and community by taking full advantage of the Ross collection.

Doing so depends on the work of the collection manager, Ruth Ackermann, whose part-time position was created through donor support in September. The position is funded for two years, but Fletcher hopes to be able to make it full-time as part of the effort to secure accreditation from the American Alliance of Museums (AAM) and raise the profile of the museum.

The Ross is currently participating in a museum assessment program through AAM, with visits from a peer reviewer and analyses of its collection. “It’s a great tool to find out where you are and what parts you might need to address before you become accredited,” says Wallace.

Gaining accreditation should also make the Ross more attractive to other museum directors as they consider where to loan pieces from their collections, further increasing the Ross’ stature.

Ackermann, an art history graduate of the Columbus College of Art and Design, is working to digitize the collection – putting it fully online – and update the catalog so that the art is properly documented and organized. “Having more people access the collection depends on us having a collections manager,” Fletcher says.

Fletcher’s goal is to have faculty members curate exhibits that engage the collection twice a year going forward. “We believe strongly that the arts can speak to all areas,” she says.

In the past, that has included partnerships with the University’s music, political science, and dance departments as well as math, computer science, social justice, and history classes.

Fletcher also hopes to make the museum more welcoming to the residents of Delaware by encouraging its use for community events. And she’s reaching out to alumni. The Mowry Alumni Center on campus routinely exhibits art by alumni, including the current Stephen Donaldson ’83 photography exhibit “Blue Light,” which will be on display until Nov. 15.

The Mowry exhibits are overseen by Wallace, herself an alumna with a degree in fine arts. She went to work for Kronewetter, the museum’s first director, as he was working to open the Ross, and 16 years later is now assistant director. “She has a long organizational memory, she works deeply to connect the museum and the community, and she brings a wealth of experience both with art practices in Ohio and with the University,” says Fletcher.

Fletcher is also excited about another upcoming alumna exhibit, that of photographer JoAnn Verburg ’72, scheduled for fall of 2019 in the Ross (see MoMA, Whitney, OWU story). She hopes to reach out more to those alumni whose time on campus predated the museum.

“A number of our alumni have wonderful collections, and we don’t know them and they don’t know us,” Fletcher says. “Many alums don’t know there is a museum, that we collect, that we regularly do exhibits of alumni artwork in Mowry, and that they can contribute to the student experience.”

Fletcher isn’t content to let OWU’s art world end at the Ross’ doors. She has already taken this mindset to its literal realization with the “Shadows We Cast” outdoor video exhibit by Tiffany Carbonneau and Susanna Crum, which was projected onto the museum facade last fall.

And in February, Fletcher was selected to direct the University’s 2018-19 Sagan National Colloquium, which will explore issues of “Art and Engagement.”

Comorau has seen firsthand Fletcher’s efforts to better integrate the museum into the Ohio Wesleyan culture, and she’s glad to be part of it. “Erin is relentless in the work she wants to do to bring more people into the museum and have different kinds of work done there,” she says.

Kathy Lynn Gray is a freelance writer from Columbus, Ohio.

The Alexander Sisters— by Winfred Rembert, 2009, dye on carved and tooled leather

by Winfred Rembert, 2009, dye on carved and tooled leather

Workers of the World Unite— by Rockwell Kent, 1937, engraving

Workers of the World Unite