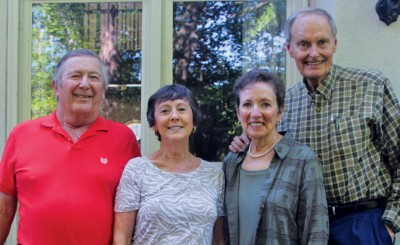 Pictured (from left) are friends Dave Garbrick, Alice McAllister Garbrick ’61, Peggy Wright DuPont ’61, and Dr. Bert DuPont ’61. Peggy and Alice were roommates at OWU and have stayed in touch through the years. They discovered at their recent 55th class reunion that they share an interest in birdwatching and bird photography. In March, the Garbricks visited the DuPonts at their homes in Houston and Galveston, Texas. Recently, the DuPonts traveled to North Carolina to join the Garbricks on a visit to Nashville and then to the Garbricks’ home in Davidson. Peggy and Alice had many happy OWU memories to talk about and also enjoyed discussing the OWU of today. 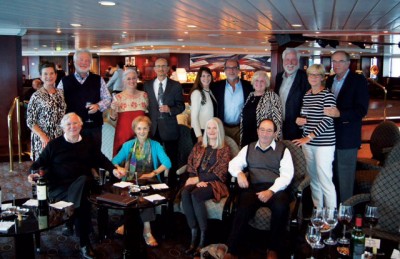 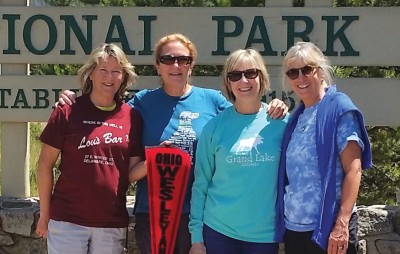 Classmates who graduated together in 1975 gathered for a brief reunion in Grand Lake, Colo., in late July. From left are Phyllis Gunn, Sarah Cowell Christiano, Robin Wilson Baker, and Ricky Smullins Daly.

Malick Recognized for Being Quite the Character 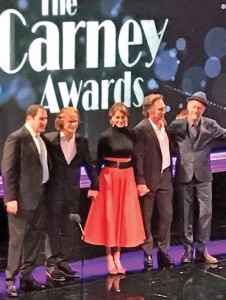 Wendie Malick ’72 (center) was honored at the third annual Carney Awards on Oct. 29 in Santa Monica, California. Created to specifically honor character actors the Carney Awards are for the “memorable, illustrious, noteworthy and unforgettable” in character acting, who “are the mainstay and backbone of every film and television show.”

Other familiar faces honored were (from left) Richard Kind of Mad About You and Spin City, William H. Macy of Shameless and Fargo, William Fichtner of Invasion and Prison Break and Xander Berkeley of 24 and The Mentalist.

Malick is best known for her work on the HBO sitcom Dream On and the NBC sitcom Just Shoot Me! Currently, she is a voice actress for the Netflix cartoon BoJack Horseman. She returned to campus in October as a special guest during kickoff festivities for the Connect Today, Create Tomorrow campaign. 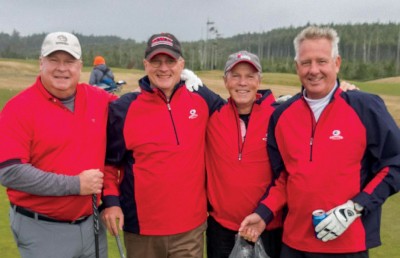 Members of the class of 1980 gathered in their finest OWU colors to play a golf tournament in Bandon Dunes, Oregon in October. And they won! (Must have been the red and black.) Pictured (from left): Mike Schilling, David Beeghly, Peter Rubacky, and Russ Whiteman. 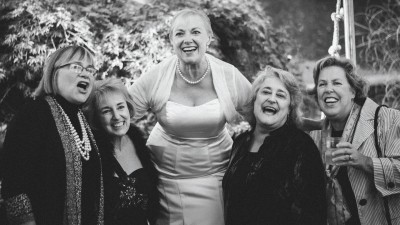 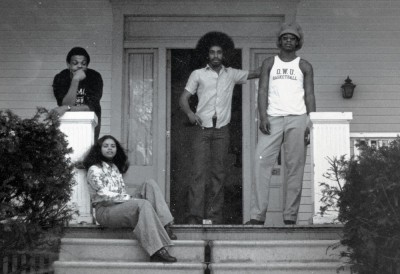 After their picture appeared in the Fall issue of OWU Magazine, several alumni recognized themselves in the archival photo of the House of Black Culture that ran with news that it will be rebuilt. Pictured (from left) are: John Cheek ’77, Jackie Wood ’75, Harlan Magruder ’78, and Stacey Payne ’78. 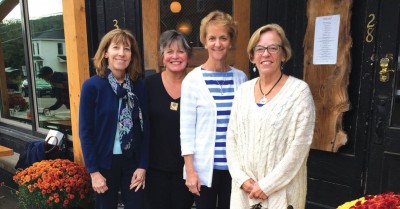 OWU friends recently gathered in Burlington, Vt. Pictured (from left) are Karen Hershner Dedo ’78, Erica Robinson Mitchell ’78, Margo Smyth Biringer ’78, and Emily Thayer Guziak ’78. The four were all freshmen together in Thomson Hall and have been getting together since 1978.

Run for Your Life (or for a Week Through the Alps) 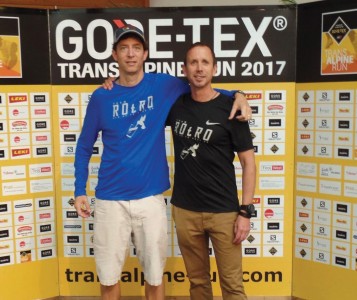 When Brent Norton ’93 and Tom Hoag ’93 started running after graduation to stay in shape, they weren’t expecting it to lead to running 164 miles over seven days through the Alps. Or, as Hoag describes it, “the highlight of the last 25 years.”

Their plan to run the Gore-Tex Transalpine Run through Germany, Italy, Austria, and Switzerland was hatched after Norton (pictured, right), who had been running Ironman races, followed Hoag’s blog about doing the TransRockies Run in Colorado. Hoag emailed Norton about the Transalpine Run, and Norton replied with two words: “I’m in.”

The two friends met as freshmen when they joined Phi Gamma Delta (FIJI), but hadn’t seen each other in 15 years. They trained on their own, Norton in Seattle and Hoag in Portland, Maine. Their first run together was on day one of the race on Sept. 3 in Fischen, Germany.

To prepare, Norton spent a year running through the Cascade Mountains to get used to the altitude – the Alps run featured 51,000 feet of ascent and 47,100 feet of descent.

The race has a high attrition rate, with about one-third of participants dropping out. “People were just wrecked by the end and limping over the finish line,” Hoag recalls. “The ones who do well in this race are on the next level, running-wise. The Germans, Austrians, and Swiss, I’ve never seen anybody as tough as those people.”

Both Norton and Hoag were struggling by day four, which they’d been warned was the hardest. Every step of descent was painful for Norton. Upon returning to the U.S., he learned that he’d been running with a stress fracture. “I taped my leg up for the last three days of running, but it was broken,” he says.

Aside from the obvious challenge of running a marathon a day in high altitudes, the trip came with an additional challenge as soon as they landed in Germany: The airline lost their bags.

“We had one change of clothes and had to buy all new equipment,” Hoag says. “But the German people were super helpful. They loaned us clothing and gave us rides to stores.”

“I didn’t think I was going to make it,” he admits. “It’s a major mental and physical setback, running without all that gear you’re used to.” Hoag eventually got his bag on day five. Norton’s didn’t show up until they were leaving, but it didn’t sour them on the feat.

“The biggest victory was crossing that line at the end and knowing how much training went into this, and doing it with a great friend,” Norton says. “We both started crying our eyes out. It was absolutely overwhelming.”

They’re already planning their next race, either a Grand Canyon run or the TransRockies together. They might go back to the Alps in 2019. “It was just so much fun, taking on a challenge like that with a buddy,” Hoag says. “It’s liberating to be up there, running through the Alps.”

Read more about their adventures on Hoag’s blog. 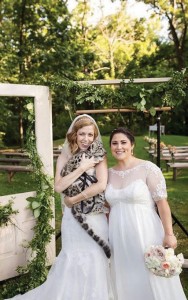 Several OWU alumnae worked together this summer at the Pwoje Espwa (Project Hope) orphanage in Les Cayes, Haiti. From left with children are Kelsey Ullom ’14, Emma Sparks ’16, Rachel Vinciguerra ’14, Kate Raulin ’12, Brenda Gable ’15, Lizzy Wynne ’16, and Courtney Durham ’12. In May, the women gathered in Haiti for their annual Fi Ki Fo (“Strong Girl”) summer camp with the preteen and teenage girls at Espwa. During the Strong Girl camp, the women implemented self-designed curriculum and activities about self-esteem, goal setting, nonviolent communication, self-expression, skills training, and female empowerment. They are excited to continue this longtime connection between OWU and Espwa, which began with Doug Dittrick ’55, a friend of the founder of Espwa. 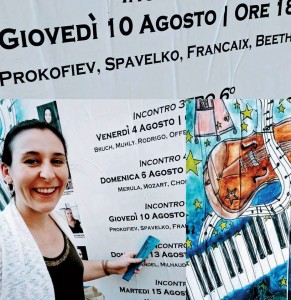 Lauren Spavelko ’11 (left) won the Festival dei Due Mondi’s fifth annual Young Composers Competition dedicated to Gian Carlo Menotti in Spoleto, Italy. Spavelko was recognized for her work Baby Book, six songs on pregnancy, miscarriage, and motherhood, which offers women support, empathy, and recognition — especially for those who have suffered miscarriages and who often feel isolated and ashamed — and promotes an open dialogue about these issues. Baby Book was performed by Lucie Chartin and Luba Podgayskaya in Spoleto in August during the Incontri Musicali chamber music festival.

Studying Birds in Hawaii, Swimming with Dolphins on the Weekends 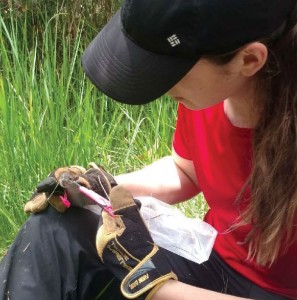 Shannon Schlater ’16 spent the early spring and summer in Hawaii, working with the United States Geological Survey in Hawaii Volcanoes National Park on a project to help protect native birds from invasive, predatory black rats. Her project tested whether the removal of black rats would increase the success rate of Hawaii Elepaio birds in successfully fledging young. While results are still unofficial, preliminary findings indicate that rat removal made a significant difference. Since the project had many components, Schlater had the opportunity to learn and develop a variety of skills such as nest searching/monitoring, small-mammal trapping, radio telemetry, radio telemetry, and bird banding. 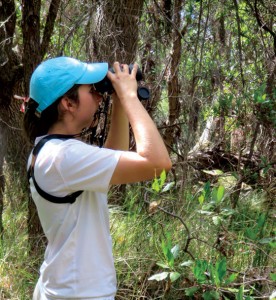 “I absolutely loved Hawaii,” Schlater said. “The project was everything I could have asked for. I thoroughly enjoyed going to work every day, and the weekends were like mini vacations. I got to swim with wild dolphins, turtles, and manta rays, lived within walking distance of the active crater on Kilauea, and visited some really beautiful places.” Schlater is now a master’s student at the University of Nebraska Kearney, where she is analyzing how the movements of red-tailed hawks, white-tailed deer, and bobcats are affected by agriculture and fragmentation.