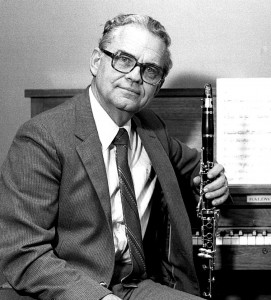 Vincent Maola ’56 of Swarthmore, Pa., recently reconnected with former professor of music Willis Olson at the retirement facility in Wooster, Ohio, where Olson resides. Olson celebrated his 96th birthday in September. Maola says: “Mr. Olson loves to walk the halls speaking Swedish because no one can understand him! He loves reading and listening to classical music. He sounds great on the phone and is thrilled to hear from his former students.” Anyone who wishes to connect with Olson may do so via Maola at vincemaola@verizon.net. Maola was Olson’s first clarinet student and reports that he continues to perform with four groups outside Philadelphia. 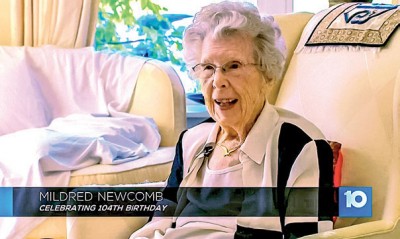 Mildred Newcomb ’41 celebrated her 104th birthday in July and was featured on WBNS-TV (Channel 10) in Columbus. When asked the secret to reaching 104, she replied: “Get to be 103.” Newcomb was in her 50s when she pursued her doctorate and retired as head of the English Department at OWU. 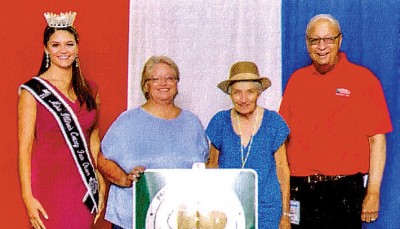 Marilyn Sturdivant Nelson ’47 owns a farm that has been in the Nelson family for more than 100 years, an important distinction in the Midwest. At the invitation of the Illinois Department of Agriculture, Nelson and her daughter, Lorine Etheridge, attended a breakfast at the Illinois State Fair honoring centennial farm families. Gov. Bruce Rauner was among the speakers at the event. Nelson (wearing hat) and Etheridge are pictured with the state fair queen and the state director of agriculture. 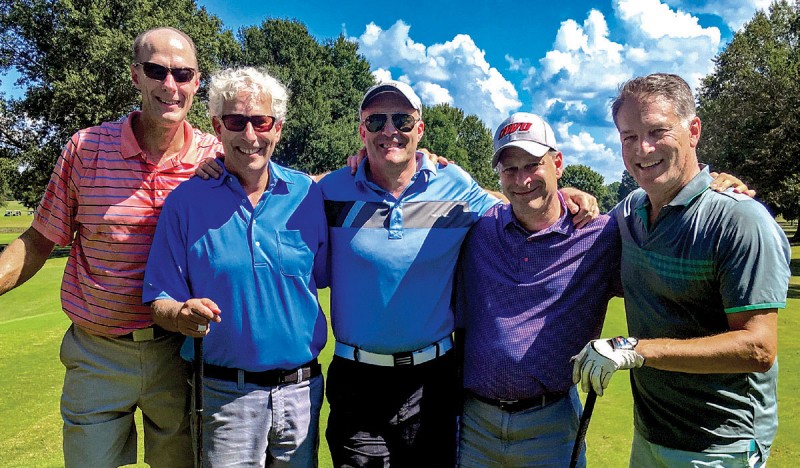 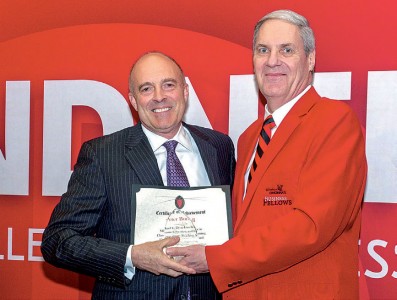 Peter Burrell ’81, left, was selected as the 2018 Michael Dean Undergraduate Professor of the Year at the University of Cincinnati’s Carl H. Lindner College of Business. Burrell has taught law courses there part time since 1993 and full time since 2013. He also continues to practice law in Cincinnati at Pinales, Stachler, Young, Burrell & Crouse, where he has been named an Ohio Super Lawyer for the past 11 years. 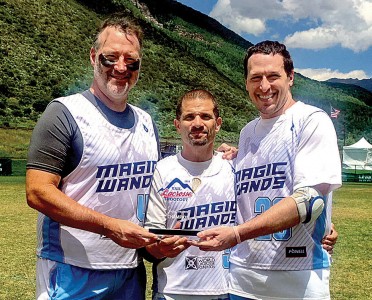 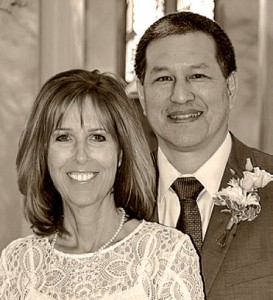 Kathleen Morey Wong ’80 and Allen Wong were married on March 17 in Dublin, Ohio. Jan Wilkin Bambach ’79, Dennis Bambach ’76, and Jeanne Bauer ’80 (not pictured) were among the wedding attendees. 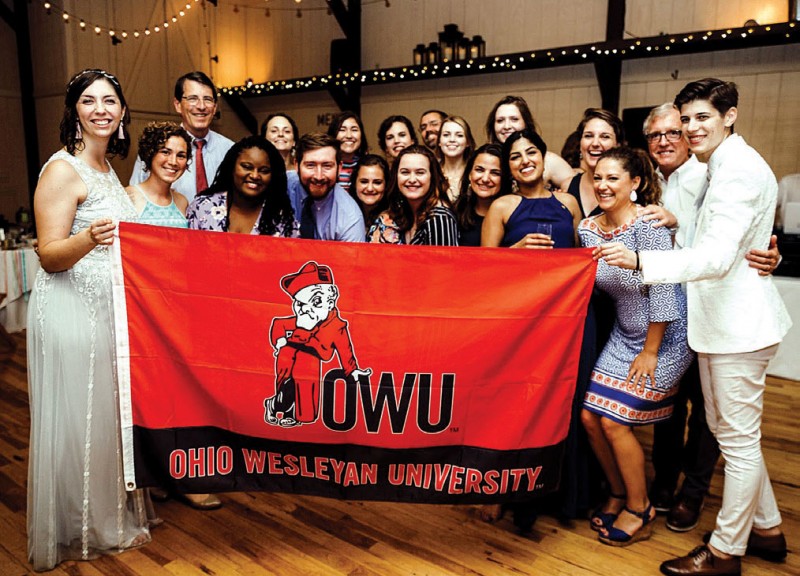 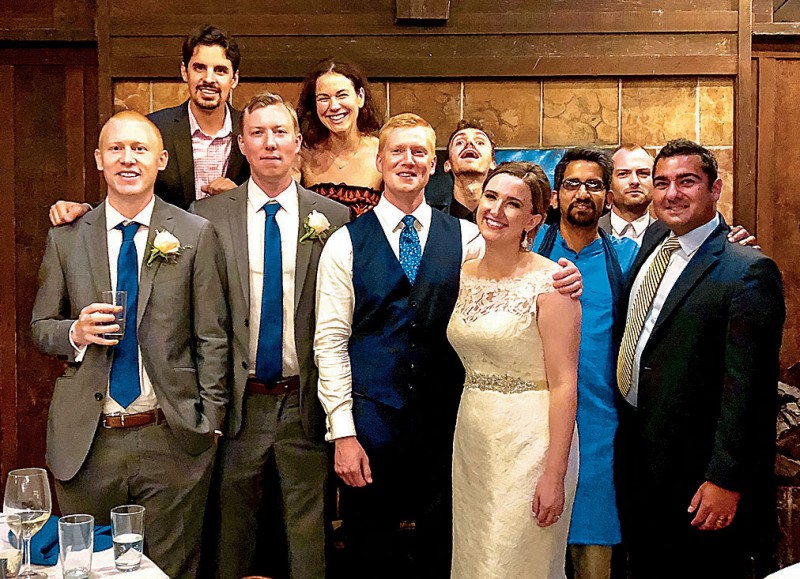 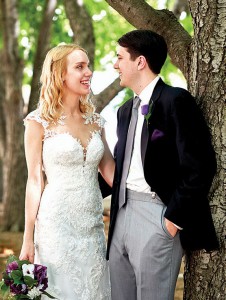 Nathan LaFrombois ’16 and Nicole Barhorst ’16 were married on Aug. 4 in Milwaukee, with 20 OWU alumni in attendance. The wedding was officiated by OWU associate chaplain Chad Johns ’02. 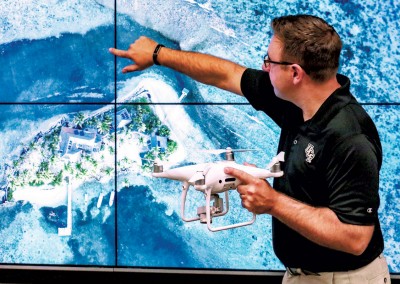 Timothy Hawthorne ’03, assistant professor of geographic information systems (GIS) in the Department of Sociology at the University of Central Florida, received a $1.25 million grant from the National Science Foundation to use drones to look at eelgrass health along North America’s Pacific coast. He is collaborating with interdisciplinary partners at the Smithsonian Institution, Cornell University, and the University of California-Davis to research eelgrass, a coastal vegetation that is vital to overall coastal ecosystem health.

At the University of Central Florida, Hawthorne leads Citizen Science GIS, a research organization that creates visualizations of social and environmental inequalities through global partnerships. Citizen Science GIS will work with the Smithsonian Marine Global Earth Observatory (MarineGEO) researchers from the Tennenebaum Marine Observatories Network to use drones to provide high-resolution mapping and imagery of eelgrass communities along the Pacific coast. The team will train community partners to operate the drones when the team cannot be on site, bringing an innovative element of citizen science to the project. Through their efforts, the team hopes to understand what environmental factors play a role in the spread of wasting disease in eelgrass communities from an ecological and geospatial perspective. Hawthorne says he is excited to combine his social science expertise with that of world-renowned scientists to pursue solutions that no one discipline could solve alone. 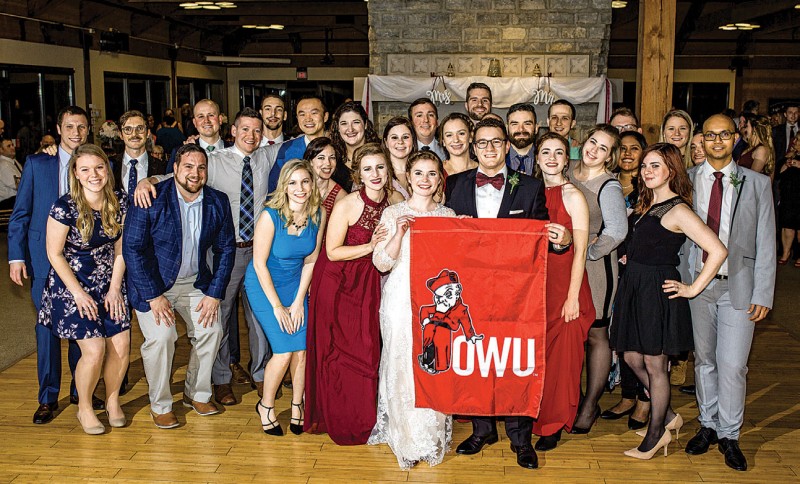 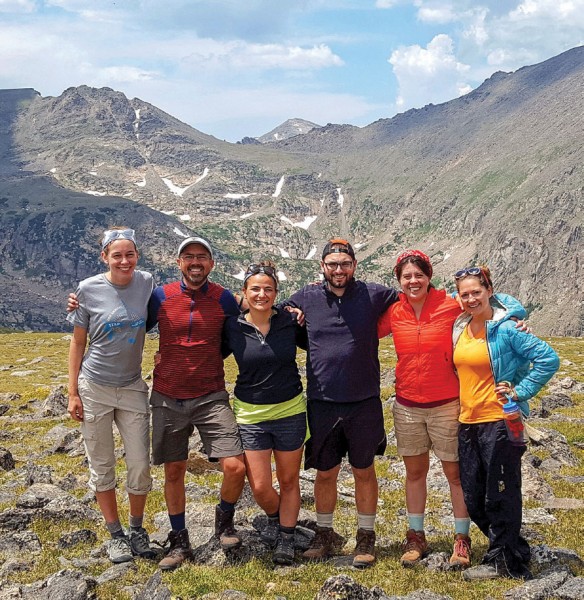 Five alumni who participated in OWU’s Wilderness Ministry program and went on wilderness treks together as students gathered in Colorado, along with three of their spouses, for a five-day backpacking and camping trip in Rocky Mountain National Park. 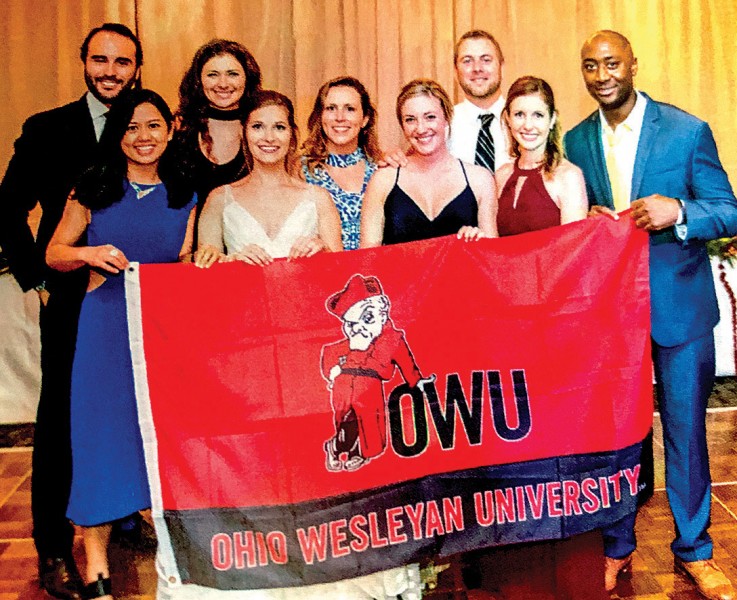 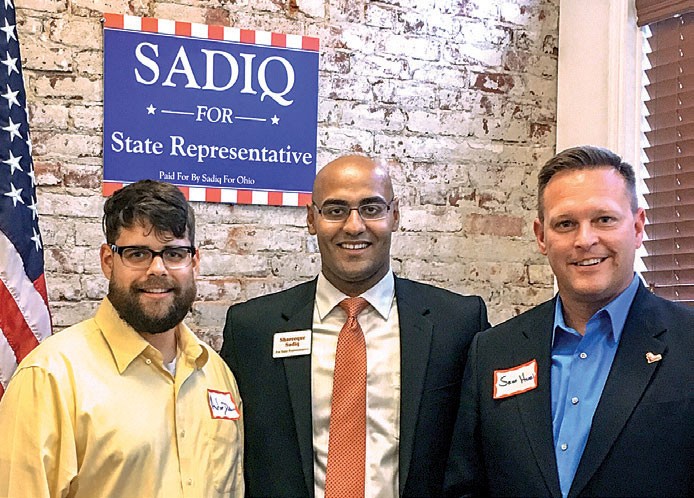 Adam Dettra ’13 (left) and Sean Harris ’97 (right) attended a fundraiser for Shareeque Sadiq ’17 (middle), who was a candidate for the Ohio House of Representatives in the 26th district, but lost in November. 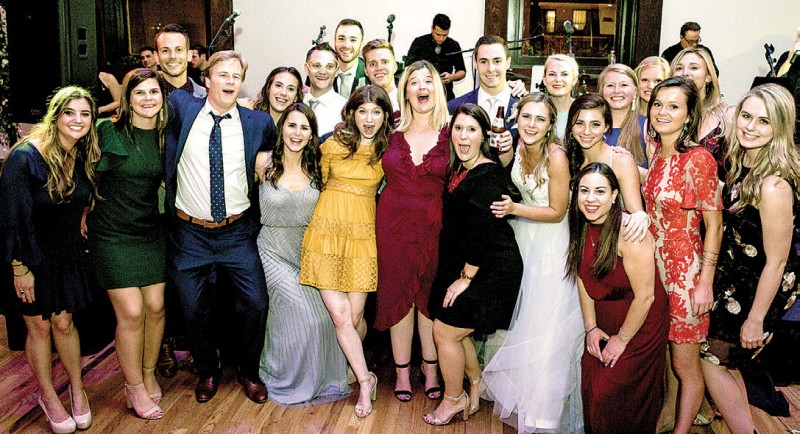 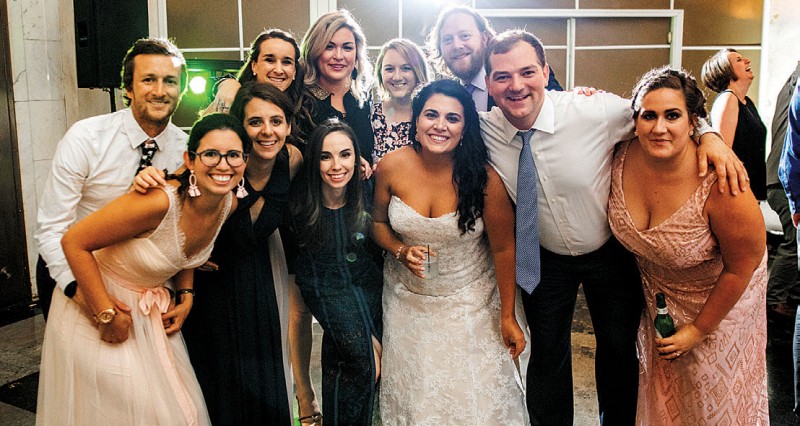 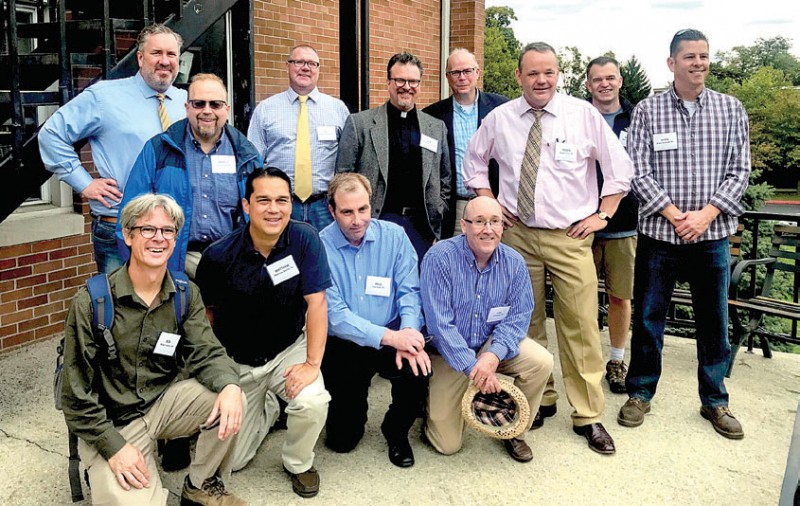 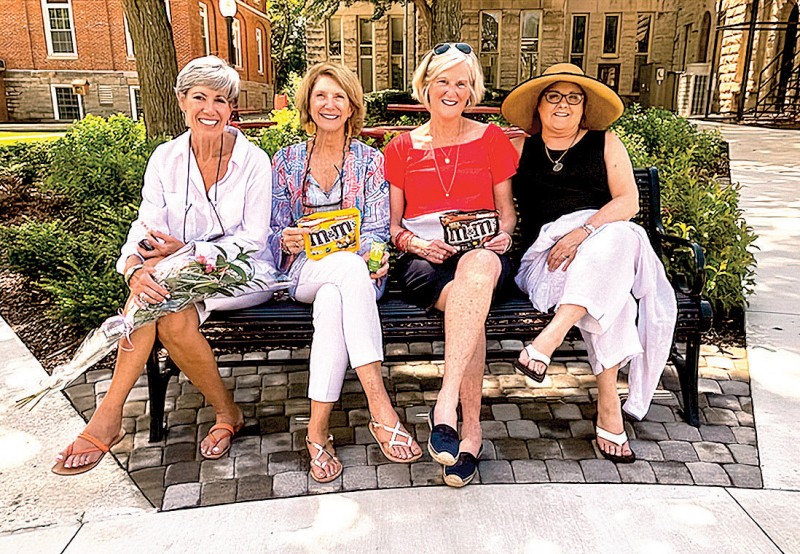 Four roommates reunited at OWU in June for the first time in more than 40 years to dedicate a bench in honor of their late classmate, Ann “Annley” Campana Judge ’73, who was on American Airlines Flight 77 that was crashed into the Pentagon on Sept. 11, 2001. After purchasing the bench in Judge’s honor, the four classmates spent a special day together on campus in celebration of her life, visiting the Delta Delta Delta sorority house (of which Judge was president during her time at OWU), enjoying Bun’s restaurant for lunch, and sharing OWU memories. Pictured from left: Nancy Bender Kortright ’74, Susan Henze Twomey ’73, Mary Ellen Gray Hart ’73, and Susie Green Beckler ’73.