7 p.m. Sept. 30 – Ohio Wesleyan alumnus Ezra F. Vogel, Ph.D., Class of 1950, presents “From Delaware to Deng Xiaoping,” in Benes Room B of Hamilton-Williams Campus Center, 40 Rowland Ave., Delaware. A sociology major at Ohio Wesleyan, Vogel is a retired Harvard University professor and author of the critically acclaimed “Deng Xiaoping and the Transformation of China,” a 928-page biography examining the legacy of Xiaoping, a leader of the People’s Republic of China from 1978 to 1992. The book has been praised as a “masterful new history of China’s reform era.” Vogel also is a former director of Harvard’s Fairbank Center for East Asian Research and the Asia Center. From 1993 to 1995, he served as the National Intelligence Officer for East Asia at the National Intelligence Council in Washington, D.C. His presentation is OWU’s 2019 Joseph and Edith Vogel Lecture, sponsored by the Department of History, and part of the 2019-2020 Sagan National Colloquium. Admission is free. Learn more at www.owu.edu/history or www.owu.edu/snc. 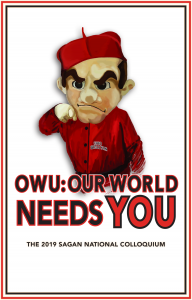 About the Sagan National Colloquium