Meet the man behind the microscope, Dr. George W. Burns... 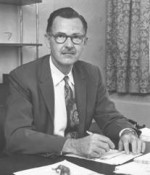 A tall and stately man, Dr. George W. Burns has been described as affable to students, professors, and administrators. He liked to connect with people, and was often found bantering with students or anyone who shared a passion for discussion. Dr. Burns welcomed students in his office to talk about planning of classes, life, difficulties, or just conversation. Funding for the SEM Lab was given from past students of Dr. Burns, as well as a gift from Gordon V. ’54 and Helen Crider ’56 Smith.

Dr. Burns made everything interesting; students loved him for his ability to enthrall them and pursue greater interests in class topics. He published two successful textbooks in plant science: The Science of Genetics: An Introduction to Heredity, 4th and 5th Editions. Both texts were published for the international market and are on display in the SEM lab.

Dr. Burns's interests were mainly botany, genetics, and meteorology. During World War II, he was one of the first to fly missions into hurricanes in order to study typhoons.

During his years at OWU, he maintained his passion for meteorology and was the official weatherman for the department. Students would ask Dr. Burns what the weather was going to be like over spring break in the areas they were traveling to.

He also enjoyed studying paleoweather events and glacial geology. Dr. Burns was involved with The Ohio State University's institute of polar science, where he served as a botanist for two American Geographical Society field parties that studied glaciers in southern Alaska. He and his fellow society researchers studied the relation of climate changes to glacier behavior during this time.

Everybody Has Their Little Quirks!

Dr. Burns was very fussy about accuracy. He planned the whole day by exact time frames, which could not be off by even a minute, not even to start early. His wife, Hermine Burns, remembers calling him one day and saying she would pick him up from work at 4:30 or 4:35. He then asked which time she would come, either exactly at 4:30 or exactly at 4:35. Also, when Dr. Burns would travel at night from the University of Minnesota to Cincinnati, he would sit behind the University of Minnesota student union until the clock struck midnight before he would start his trip.

A Brief Timeline of Events