Dark Matter and the OWU Connection

You and I and everything you can see are made of what physicists call “baryonic matter.”

But most matter in the universe appears to be another type that we cannot see, because it doesn’t emit, reflect, or absorb light, so we call it “dark matter.” We still don’t know for sure exactly what it is, and I’m not going to try to answer that in this “teaching moment.” But I am going to tell you about the OWU connection to the discovery of this mysterious dark matter.

We cannot see dark matter, but it does have gravity—and we can see how gravity affects other objects. In the 1930s, Swiss astronomer Fritz Zwicky, working at California Institute of Technology, discovered that galaxies in clusters are moving fast enough that the cluster would fly apart if only the gravity of the matter we see was available, which was the first hint of the existence of unseen, dark matter.

Here’s a famous photo of Fritz Zwicky said to capture his personality:

One day I was looking at it thinking “Who does he remind me of?” And then it hit me! 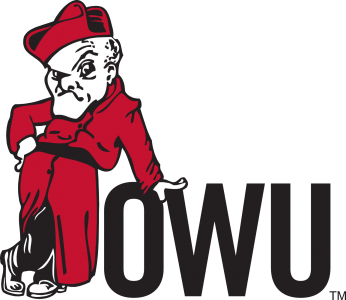 But this is not the OWU connection to dark matter that I’m talking about.

In 1970, American astronomer Vera Rubin and Kent Ford published a famous paper called “Rotation of the Andromeda Nebula from a Spectroscopic Survey of Emission Regions.”

Emission regions are star-forming regions similar to the Orion Nebula seen at right. They’re bright enough to study in other galaxies, including the Andromeda Galaxy.

You can measure how fast objects are moving in these distant galaxies by observing the Doppler effect. We all experience the Doppler effect when we hear a train approaching and passing by us. A train’s motion piles up the sound waves in front of it when it approaches, and stretches them out behind it when it moves away. That’s why the pitch of a train whistle is higher when the train is approaching you and lower when it’s moving away. This Doppler effect applies to light waves, too.

Rubin and Ford measured Doppler shifts to determine how fast emission regions orbit the center of the Andromeda Galaxy at different distances from the center.

In photos of Andromeda it appears as though most of the galaxy’s mass is near its center, in which case orbital speeds would decrease as we got farther away from the center, as with planets orbiting the Sun. For instance, the Earth orbits the Sun at speeds three times faster than Saturn. And Mercury speeds along its orbit about 50 percent faster than the Earth.

Surprisingly, though, Rubin and Ford saw that orbital speed is almost constant when you move far from the galactic center. Later, Rubin measured more galaxies, and the results were always the same: near constant orbital speeds that imply dark matter! The unseen dark matter is providing extra gravity, making objects orbit faster than they otherwise would.

We now know there’s more than five times as much dark matter in the universe than baryonic matter.

So what’s the OWU connection to dark matter?

From Section II of their groundbreaking paper I quote: “The DTM image tube spectrograph was used on the 72-inch telescope of the Ohio State and Ohio Wesleyan Universities at Lowell Observatory….For the Perkins telescope, the scale perpendicular to the dispersion is 40" mm-1.”

In other words, they used the original Perkins Observatory telescope after it had been moved to Lowell Observatory in Arizona in the early 1960s. At the time, that telescope still belonged to Ohio Wesleyan.

That is the OWU connection to the discovery of the dominant form of matter in the universe!

In this new department, Ohio Wesleyan faculty will bring their classroom into the pages of OWU Magazine, providing mini-classes on topics that fascinate them.