These themes may not appear to be related to most people, but for Ryan Haddad ’15, a gay man with cerebral palsy, they are as real as the braces on his legs.

The Parma, Ohio, native, who majored in theatre and creative writing at Ohio Wesleyan, now lives in New York City as an actor and writer, working as a licensing representative for Samuel French, Inc., a major publisher of musicals and plays. His senior capstone one-man production, “Hi, Are You Single?” which he continues to perform, explores his own take on the complicated intersection of romance and disability as a single gay man.

His solo performance earned him Ohio Wesleyan’s 2015 Excellence in Performance Award, and he has since gone on to perform the show at New York’s Dixon Place and to sold-out performances at the Hot! Festival, a prominent LGBT theatre festival.

The Huffington Post has called the performance “a stirring work of theater, replete with both heartrending and deliberately hilarious moments.” 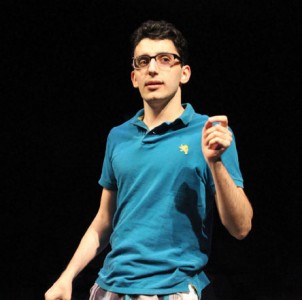 “I feel so strongly that the media, and people in general, have completely desexualized disability,” says Haddad, who recently had a small guest role on the Netflix series “Unbreakable Kimmy Schmidt.” He aims to challenge that preconception, as well as the lack of representation in the media and the arts, of people with disabilities living full lives. Haddad says he never had to confront his cerebral palsy until he started trying to date. “Ninety-five percent of men don’t look at me because of the braces and walker.”

At OWU, Professor of Theatre Edward Kahn cast Haddad in “Ring Round the Moon” when Haddad was a freshman. One of his favorite roles was in “A Little Night Music,” where he played the role of the grandmother. He wrote short plays, including “Art Unfinished,” which became an American College Theater Festival regional finalist.

Haddad credits a weeklong OWU master workshop with acclaimed Los Angeles-based performance artist Tim Miller as the springboard for his work. Miller’s mentorship led Haddad to develop a full-length piece about his own experience. “That was the really defining part of my time at OWU,” he says. “I was on this new path to find my own voice as a writer and performer.”