A Shark Comes to Campus 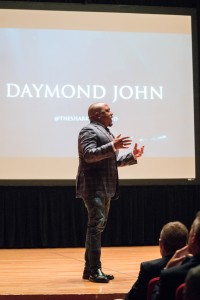 There was no need to keep away from this shark – and no one did.

Entrepreneur and celebrity Daymond John, an investor on ABC-TV’s “Shark Tank,” visited Ohio Wesleyan University on Oct. 19 to share his “5 Shark Points: Fundamentals for Success in Business and Life” with a packed house at Gray Chapel.

In addition to his public presentation, John also made time for a private meet-and-greet with nearly 20 Ohio Wesleyan students.

Michael Sheetz ’19, an accounting and business administration double-major, participated in the sit-down chat. He said John answered all of the students’ questions in-depth and gave everyone a chance to participate in the discussion.

“He gave us a pragmatic view of the business world both as entrepreneurs and as someone working for a business,” Sheetz said. “Overall, I thought his talk was funny, insightful, and motivating.”

During John’s Gray Chapel talk, he encouraged budding entrepreneurs to “always keep swimming” and to remember that they are their brand.

“Put yourself in two to five words,” John told the crowd. “[Shark Tank] doesn’t invest in products. We really invest in people.”

John also discussed the importance of learning how to represent and pitch oneself. TV producer Mark Burnett first learned about John when he began appearing on talk shows. Impressed by John’s poise and disposition, Burnett invited him to be part of “Shark Tank.”

John’s own entrepreneurial career dates back to his teens, when his mother taught him to sew and he began making hip-hop-inspired hats. His work ultimately led to the creation of the FUBU apparel company.

John said co-founded the clothing line with a budget of $40 to purchase fabric and other sewing materials. In making his own “Shark Tank”-type deal, John collaborated with Samsung’s textile division, which agreed to work with FUBU as long as he sold $5 million worth of FUBU gear in three years.

Though John was unsure whether he could make that happen, he ultimately sold $30 million worth of clothes in three months, thanks in part to a now-famous GAP commercial featuring musician LL Cool J.

“It’s the one thing every successful person has in common,” John said of his work with FUBU. “I loved what I was doing in my life.”

John’s message turned more serious when he discussed his recent cancer scare with the OWU audience.

Doctors detected a thyroid nodule during a physical and admitted John to the hospital. Following a scheduled one-hour surgery that lasted three hours, surgeons discovered that he had Stage 2 cancer.

“Entrepreneurs and executives, we don’t take care of ourselves,” John said. “And if we don’t have our health, we don’t have anything else. If one person in this room goes out and gets early detection, then I know exactly why I have this public stage.”

John Milligan ’83, vice chair of the Board of Trustees, grandson of the lecture series’ creator, was on hand to introduce John to the crowd.
The Milligan Lecture Series is coordinated each year by Ohio Wesleyan’s Woltemade Center for Economics, Business and Entrepreneurship. The center’s mission is to enhance academic programs and provide real-world opportunities for students that help to create future generations of business and world leaders. Learn more at www.owu.edu/woltemade.