The same month Kristen Canda graduated from Ohio Wesleyan University in May 2017, the fine arts major was selected as the 2017-2018 artist-in-residence for the Lancaster Festival in central Ohio’s Fairfield County.

An 11-day celebration of the arts, music and community, the festival is held each July in the City of Lancaster, located about 30 miles southeast of Columbus. During the 2017 festival, Canda took photographs, made sketches, and began planning the nine paintings and four drawings she created for this year’s festival, which continues through July 28. 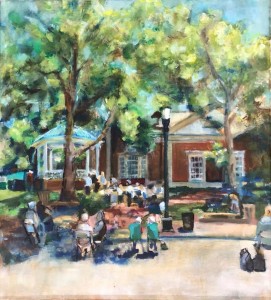 “The paintings and drawings I did for this residency are realistic in nature,” said Canda, who graduated from OWU with concentrations in figure drawing, ceramics, and painting.

“I tried to capture many different aspects of the festival, mainly by depicting various concert venues,” she said. “I showed the events from the perspective of an audience member and frequently included recognizable landmarks exclusive to Lancaster in attempts to make the work relatable to the festival goers.”

Canda credits several of her Ohio Wesleyan professors with helping to prepare her for this experience and for her current full-time job. 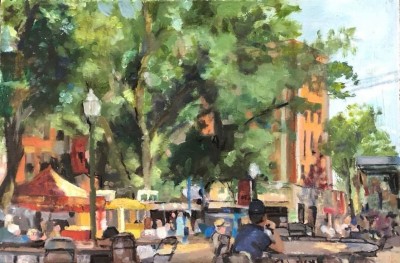 “Frank Hobbs (painting) and Kristina Bogdanov (ceramics) have been invaluable mentors to me through my time at Ohio Wesleyan as well as my first year out of school,” Canda said. “Their expertise gave me the skills and technical knowledge to inform the work that I do today.

“Since graduating, I have been working as a metalsmith at Océanne, a jewelry studio in Cleveland, Ohio,” she said. “For this opportunity, I must also acknowledge professor Cindy Cetlin, who taught me the techniques that qualified me for this position.” 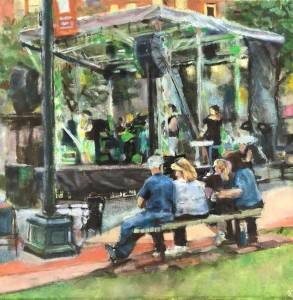 In the fall, Canda said, she will be attending Wayne State University in Detroit, Michigan, to pursue a Master of Fine Arts degree in painting.