Biology Professor Laurie Anderson is on a quest to solve 21st-century problems, and her students are part of the solution.

“When I first got the actual letter,” Professor Laurel “Laurie” Anderson says about receiving her award notification, “I thought, ‘Why did they bother to send the rejection letter Federal Express?’”

Anderson, a professor of botany-microbiology at Ohio Wesleyan since 2001, may not have imagined that she would be selected the 2015 Ohio Professor of the Year, a prestigious award sponsored by the Carnegie Foundation for the Advancement of Teaching and the Council for Advancement and Support of Education (CASE). But her students and colleagues weren’t surprised. Anderson’s talent for presenting class content clearly to science majors and nonmajors alike, her belief in treating students as research partners, and her dedication to research inside and outside the classroom created a dynamic learning environment.

A Scientist in the Classroom

Nathan Madonich ’16 says Anderson is the reason he became a botany major as a freshman. She opened his eyes to how “plants are helpful on an ecological level and how humans are able to use their various attributes.” Since taking the Organisms in their Environment class with Anderson, Madonich has developed a keen interest for a subject he hadn’t considered before coming to OWU.

Developing student interest in the field, goes beyond simply lecturing, Anderson believes. It requires creating an environment in which students are scientists in the classroom. She explained her approach in her award essay as one in which she “didn’t see students, instead, I saw research partners.” Anderson embeds research into her classes so students learn to practice ecology instead of just hearing about it.

President Rock Jones says Anderson “sets the ultimate example of structuring a research agenda that advances her own work while also creating extraordinary opportunities for undergraduate students to share in that research and to develop their own scholarly habits.” 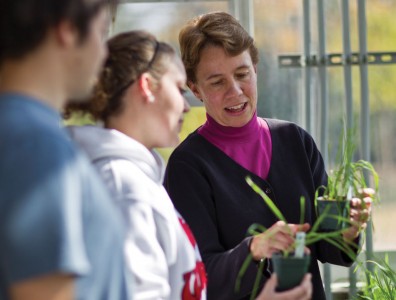 Several students can attest that Anderson helped them grow significantly as scientists through their collaborative research. Blake Fajack ’16 worked with Anderson in an independent study project to make a documentary from footage he took in the Galápagos. He says the most striking thing about working with Anderson is that he “very much felt that [he] was working with her and not as her student.” Their work was symbiotic; he knew the necessary film-related parts to include, and Anderson “knew the necessary research components.”

Adrian Pekarcik ’14 succeeded with Anderson’s help as well. After a presentation he gave in her Plant Communities and Ecosystems class, Anderson suggested Pekarcik pursue a research project based on the presentation. With Anderson’s help, Pekarcik was able to earn an OWU Student Individualized Project grant and help introductory botany students restore two plantings on OWU’s campus.

He identified the local arthropod communities from three habitats on campus, successfully defended his research as an honor’s thesis project, and was awarded the Burns-Shirling Award for Outstanding Achievement in Botany & Microbiology.

Pekarcik says his time with Anderson also prepared him for his job with the National Park Service and for graduate school at Auburn University.

Lauren Blyth ’06 completed a two-semester independent study with Anderson that turned into a published research paper. Blyth says Anderson is “realistic and down-to-earth—and not just in the soil labs.” She says Anderson taught her the importance of setting goals, but also of not being too hard on herself. Blyth says she considered Anderson an “equal collaborator” in their study of deer-dispersed seeds.

Anderson stresses the importance of not only treating students as research partners to enhance their learning experience, but also of showing them that faculty are people who are also always learning. One of her mottos is, “How can I learn more about the world and communicate that to other people?”

With funding from the National Science Foundation, Anderson, along with other faculty from undergraduate colleges across the nation, founded the Ecological Research as Education Network (EREN). The network’s mission is to create and test models for collaborative, publishable ecological research involving faculty and undergraduate students coordinating data collection in different sites from across the United States and the world.

“Ecologists at small colleges usually collect data with their students, but rarely do they collaborate at this large scale,” says Anderson, who is the EREN coordinator.

EREN has grown from its start in 2010 to include more than 300 faculty members from over 200 colleges nationwide. According to a 2015 survey of EREN faculty, over 4,000 students have been involved in EREN projects in some way.

Anderson says EREN is not only a great scientific research tool but also helps students think on broader scales. For instance, instead of focusing on how a forest ecosystem works at only one site,
students can compare data from different forest sites and see that forests can vary in their responses to stresses such as pathogens and human disturbance based on the climate, soil type, and surrounding landscape the forest occurs in.

EREN also allows students to learn to categorize and share data effectively. For example, Anderson says, what if one person places a species name in a column labeled “Species,” but someone else calls it “Name of Plant”? “When you try to merge those in a computer program or database, it doesn’t work,” she says. “Because of this difficulty, professors in EREN try to teach students essential techniques for sharing data among multiple sites and scientists.”

Anderson believes a liberal arts education is the key to solving “wicked problems,” a term first coined in 1972 by social science theorists Horst Rittel and Melvin Webber. She defines these problems as “so complicated and multifaceted that they appear almost unsolvable,” such as poverty or global climate change. To solve these problems, she says, the next generation needs a “diverse intellectual toolset.”

A graduate of Colby College in Maine, Anderson has been dedicated to liberal arts from the start. She recalls an early experience: “I was in a Mexican restaurant, and a student came up and said, ‘Dr. Anderson I just wanted to tell you that I used to never pay attention to environmental articles that I read in the newspaper, but now after your class, I do. I look at them all the time and I think about those things a lot.’ I said, ‘Well that’s great. What’s your major?’ And she said, ‘Finance.’ I was so pleased to think that somebody going into finance would have some perspective on environmental issues.”

The incident inspired Anderson to teach at a college like Ohio Wesleyan.

“I find it really satisfying to teach at a liberal arts college and educate not only the next scientist, but also the next business person, artist, or writer about ecology.” 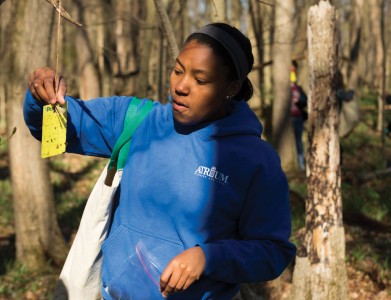 After 15 years, then, how does Anderson develop diverse toolsets for solving these wicked problems? She believes interdisciplinary studies are a great starting point. This year Anderson and Karen Poremski, associate professor of English, were selected to participate in a multi-institution grant from the Great Lakes College Association focused on creating interdisciplinary courses.

Anderson and Poremski plan to develop a course linking ecological science and literature at a grant-funded workshop this summer. The fundamental idea, Anderson says, is to have students read both scientific papers and literature on the same topics taken from nature, and compare and contrast different ways of knowing and exploring the natural world. The course will be submitted for review by Ohio Wesleyan’s Academic Policy Committee in Fall 2016, with plans to offer it to students in Spring 2017.

Anderson also develops problem toolsets through her travel-learning courses. Even though it is a single class and subject, Anderson’s plant ecology course in Brazil is multidisciplinary in its own way. While studying the ecology of Brazil, students also learn about other aspects of the country from local guides, such as how poverty affects the environment. Understanding tropical forest ecology requires some perspective on human interactions with the ecosystem, says Anderson.

Her students have fond memories of these travel-learning courses, considering Anderson not just as a professor, but also a fun and interesting peer. Madonich says he was surprised to find out that along with ecology, Anderson is interested in music and is an “art aficionado.” But, most notably, he says, “she plays ukulele and does a great rendition of Stairway to Heaven.”

After considering all of Anderson’s incredible teaching and research accomplishments, Marissa Witkovsky ’15 says she knows what makes her mentor most deserving of the Ohio Professor of the Year award. “Sometimes professors put pressure on ‘exceptional’ students to succeed on a certain set path,” Witkovsky says, “but Laurie has always simply listened to my struggles and questions and has given me honest advice about everything—careers, life, etc. Of course she would love to see students do big, amazing things, but it means a lot to me that she says nothing I do will ever disappoint her.”

Abby Hanson ’16 is editorial assistant of OWU Magazine and is a creative writing major with minors in French and comparative literature. She performs in Pitch Black, OWU’s all-women a cappella group. Her favorite place on campus is Peale Chapel, a room with a view of Delaware. Sometime in her life, she’d love to play the role of Elphaba in Wicked—anytime, anywhere.