Olmstead’s novel is one of 90 books by Ohio authors chosen by the Ohioana Library Association to help it celebrate its 90th anniversary. All 90 books – divided into decades since the association’s founding in 2019 – now are listed online in its blog.

“When Robert Olmstead’s Coal Black Horse – a historical novel about a young boy sent to find his soldier-father in the Civil War – was published, it was hailed as joining “the pantheon of great war novels, including All Quiet on the Western Front and The Red Badge of Courage.” The book was a huge best-seller and winner of a number of awards, including the Ohioana Book Award. Olmstead has since won a second Ohioana Award, for 2012’s The Coldest Night.”

Olmstead, a professor of English and director of Creative Writing at Ohio Wesleyan, joined the University in 2002. The most recent of his nine novels is 2017’s “Savage Country: A Novel.” 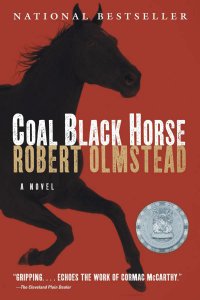 In reviewing that book, author Tom Franklin said: “Robert Olmstead gets better with every book. If you know all of his previous books, you know how startling this fact is, and how startlingly good this writer is.”

In addition to earning Ohioana honors, Olmstead’s “Coal Black Horse” also earned the Heartland Prize for Fiction, “The Coldest Night” was a finalist for the Dayton Literary Peace Prize, and “Far Bright Star” was the winner of the Western Writers of America Spur Award.

Read more about Olmstead and Ohio Wesleyan’s Department of English at www.owu.edu/English.

The Ohioana Library Association was founded in 1929 by Ohio First Lady Martha Kinney Cooper to collect, preserve, and promote the works of Ohio authors, artists, and musicians. Today its holdings include more than 45,000 books by or about Ohioans, 10,000 pieces of sheet music, biographical files on notable Ohioans, personal papers of Ohio authors and artists, and numerous scrapbooks created by Ohio civic and cultural organizations. Learn more about the Columbus-based association at www.ohioana.org.