'In the Heat of the Summer'

DELAWARE, Ohio – An off-duty white police office shoots and kills a black teenager near the New York high school where the ninth-grader is taking summer classes. A demonstration in Harlem two nights later erupts in violence, followed by a week of rioting, looting, and fighting.

It’s July 1964, and the death of 15-year-old James Powell marks the start of the “long, hot summers” that characterize the 1960s. Ohio Wesleyan University history professor Michael W. Flamm, Ph.D., explores Powell’s death and its impact in his new book, “In the Heat of the Summer: The New York Riots of 1964 and the War on Crime.”

Flamm, a member of the Ohio Wesleyan faculty since 1998, said the shooting reverberated throughout the nation, affecting the presidential campaign between Democratic incumbent Lyndon Johnson and Republican challenger Barry Goldwater, who promised to address “crime in the streets” in his acceptance speech at the GOP National Convention – the same day Powell was shot. 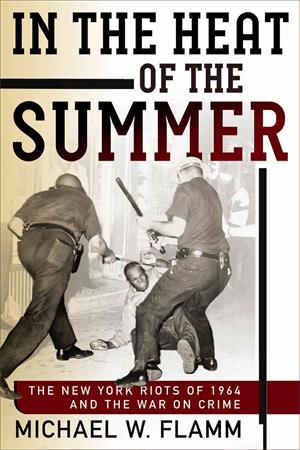 In response, Flamm said, Johnson launched the War on Poverty to address the “root causes” of urban unrest, followed by the War on Crime that expanded the federal government’s role in law enforcement and also set the stage for the War on Drugs.

Flamm’s book is earning critical acclaim, including praise from Wil Haygood, journalist and author of the New York Times bestseller “The Butler: A Witness to History.”

“Until now,” Haygood stated, “the 1964 Harlem Riot has not been properly fixed in American and literary lore. Michael Flamm’s riveting retelling of the saga – against the backdrop of a single black teenage death and replete with the journalists, politicians, and activists who were there – fills the missing gap in a work that is necessary, and unbelievably timely.”

Historian and author Michael Kazin also praised Flamm’s book, adding: “ ‘In the Heat of the Summer’ is not simply the best history ever written about race and urban violence in the 1960s. It brilliantly reveals the roots of the ongoing mistrust between police and African-Americans. And Michael Flamm’s vivid narrative is hard to put down.”

At Ohio Wesleyan, Flamm teaches courses in U.S. history from 1877 to the present. He earned his bachelor’s degree at Harvard University, his doctorate at Columbia University, and is a former Fulbright Scholar.

In addition to “In the Heat of the Summer,” Flamm also is the author of “Law and Order: Street Crime, Civil Unrest, and the Crisis of Liberalism in the 1960s” and the co-author of “Debating the Reagan Presidency” (with John Ehrman) and “Debating the 1960s: Liberal, Conservative, and Radical Perspectives” (with David Steigerwald).

Learn more about Flamm at www.owu.edu/history and more about his latest book at http://www.upenn.edu/pennpress.