DELAWARE, Ohio –Ohio Wesleyan University professor and poet David Caplan’s newest work is described by one reviewer as “a book of devotional poems that speaks poignantly, often heartbreakingly, to the believers and nonbelievers of our present moment.”

Titled “Into My Garden,” the book is Caplan’s sixth and one of his most personal. Available now, it was published by Ben Yehuda Press and is part of its Jewish Poetry Project.

“I have been working on this book for several years,” said Caplan, Ph.D., a member of Ohio Wesleyan’s Department of English since 2000. “Most of the poems deal with life in a Chassidic yeshiva, an institute for the study of Jewish texts. I wanted to capture the intensity of that experience as the students grapple with how to make sense of the texts they read and their lives.”

A portfolio of the poems appeared previously in the Virginia Quarterly Review, which awarded them its Emily Clark Balch Prize for Poetry. The prize is given annually to honor the best single poem or group of poems published by the magazine during the previous year. Those poems, Caplan said, form the core of the book, which is, and yet isn’t, autobiographical. 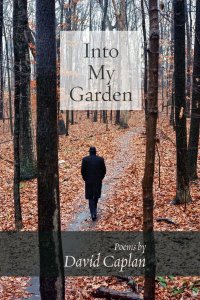 “The speaker of many of the poems is both like and unlike me,” Caplan said. “We share some things in common but are different in other ways. When writing a poem, even one rooted in autobiographical experience, a poet tries to craft something that transcends it, to create something beautiful that others may enjoy.”

And both critics and reviewers are enjoying Caplan’s elegant verse. “One encounters here an unusual sensibility – profound, thoughtful, rigorous, tender” a second reviewer states. “An assured, commanding book which has its sights on something far more important than the merely literary.”

In addition, Jewish Review of Books proclaims: “The beauty of Caplan’s book is that it is not polemical. It does not set out to win an argument or ask you whether you’ve put your tefillin on today. These gentle poems invite the reader into one person’s profound, ambiguous religious experience.”

With “Into My Garden” completed, Caplan already is working on several new projects. “I am writing ‘American Poetry: A Very Short Introduction for Oxford University Press’; a third poetry collection, ‘North Shore,’ which consists of elegies for my father; and a monograph of American poetry, provisionally titled, ‘The Art of Exclusion,’” he said.

At Ohio Wesleyan, Caplan is the Charles M. Weis Professor of English and the associate director of creative writing. His scholarly interests include poetics and contemporary poetry. His previous books are “Questions of Possibility: Contemporary Poetry and Poetic Form” (2004), “Poetic Form: An Introduction” (2006), “In the World He Created According to His Will” (2010), “Rhyme’s Challenge: Poetry, Hip Hop, and Contemporary Rhyming Culture” (2014), and “On Rhyme” (2017).

He serves as a contributing editor to both the Virginia Quarterly Review and to Pleiades: A Journal of New Writing. He also is a member of the executive committee of the Modern Language Association’s Creative Writing Forum, an affiliated researcher at the Centre Interdisciplinaire de Poétique Appliquée in Belgium, and an affiliated professor at the University of Haifa in Israel. Twice he has been a Fulbright Lecturer in American Literature at Belgium’s University of Liège.