Maggie Smith to Read from Her New Book Nov. 2 at University 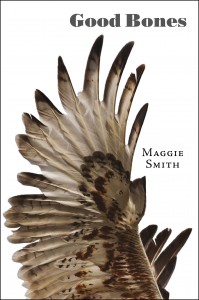 “Good Bones” is now the title of Smith’s third and latest book of poetry, released this month by Tupelo Press. Smith, visiting poet at Ohio Wesleyan University for 2017-2018, will read from her book during a free event at 4:10 p.m. Nov. 2 in the Bayley Room of Beeghly Library, 43 Rowland Ave., Delaware. Books will be available for purchase at the event, and Smith will sign copies after her reading.

A 1999 Ohio Wesleyan graduate, Smith said the book doesn’t necessarily have a theme, “but I will say that what many of the poems have in common is reconciling beauty and brokenness.

“How do I orient my children to this world, which is equal parts wonder and horror?” Smith asked. “I find myself writing out of the experience of watching my children read the world like a book they’ve just opened, knowing nothing of the characters or plot. They are seeing everything for the first time, and I am seeing it again.

“Articulating this world for my children has required me to rearticulate it for myself,” Smith said. “In convincing them of the magic in the world, despite its dangers, I’ve convinced myself of it, too.”

Smith also has convinced critics, with one reviewer proclaiming that her “poems affirm the virtues of humanity: compassion, empathy, and the ability to comfort one another when darkness falls” and another stating that: “It’s Smith’s dynamically precise and vivid images, and her uncanny ability to find just the right word or action to crack open our known experience, that make ‘Good Bones’ an extraordinary book. Maggie Smith demonstrates what happens when an abundance of heart and intelligence meets the hands of a master craftsperson.”

Since her poem “Good Bones” attracted so many online readers last year, it has been named the Official Poem of 2016 by the BBC/Public Radio International and been incorporated into an episode of CBS-TV’s political drama “Madam Secretary.” In addition, Smith, a Bexley resident, has been named the 2016 Ohio Poet of the Year.

In “Good Bones,” the OWU English major compares the world to a piece of real estate that needs work, but has potential:

Life is short and the world
is at least half terrible, and for every kind
stranger, there is one who would break you,
though I keep this from my children. I am trying
to sell them the world. …

This place could be beautiful,
right? You could make this place beautiful.

Smith’s previous books are “The Well Speaks of Its Own Poison” and “Lamp of the Body.” She has earned fellowships from the National Endowment for the Arts, the Ohio Arts Council, and the Sustainable Arts Foundation, among others. Read more about Smith at www.maggiesmithpoet.com and more about Ohio Wesleyan’s Department of English and English major at www.owu.edu/english.