By Emily Feldmesser ’16 and magazine staff

During a cold two days in February, Gray Chapel was a place of fiery political oratory and pageantry.

With colorful signs and speeches dominating the proceedings, some 400 student delegates and other participants at Ohio Wesleyan University’s Mock Convention gathered to choose the Republican nominee for U.S. president. The choices came down to Sen. Ted Cruz of Texas and Ohio Gov. John Kasich. Neither candidate had enough delegates to handily win the nomination, which meant a second vote was needed.

The winning candidate needed at least 139 delegates to be the nominee. In the final run-off, and to the applause of many in the crowd, Kasich pulled ahead with 173 delegates, overtaking Cruz’s 100 delegate count. South Carolina Gov. Nikki Haley was nominated for vice president. 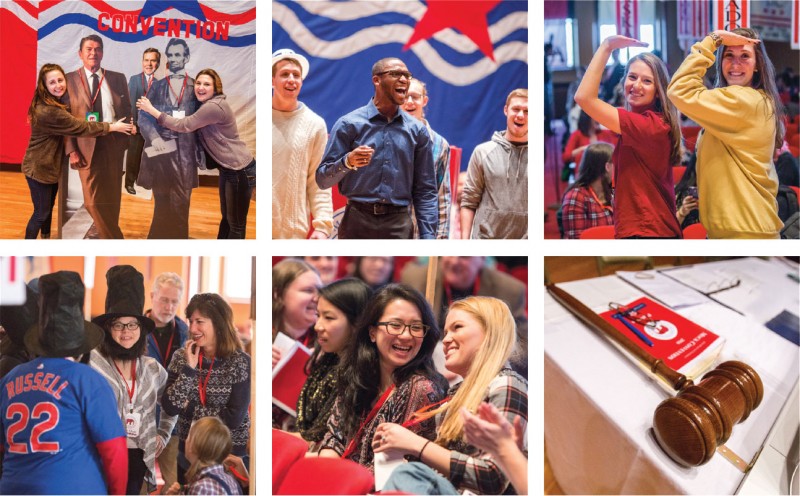 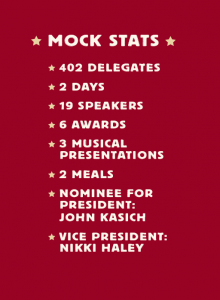 One of the oldest and most beloved of OWU traditions, Mock Convention is held during presidential election years, and is limited to the current out-of-power political party. Since 1884, and except for some nominating cycles when the event wasn’t held, Ohio Wesleyan students have run the mock conventions—bargaining and boasting, debating and dealing, pounding the podium and championing their candidates.

President Rock Jones, who participated along with students, faculty, and staff, says Mock Convention is “the ultimate example of opportunities for students to connect theory to practice as they experience firsthand the dynamics of a national political party convention, including adopting rules for the convention, debating and adopting a platform, and nominating candidates for president and vice president.

“This year’s convention included spirited and thoughtful debate on many of the most pressing domestic and international issues facing this year’s candidates,” he says. “I was impressed by the participation of our students, and they had great fun along the way.”

Mock Convention Faculty Advisor Ashley Biser says Mock Convention is a unique and practical learning experience for students across the academic spectrum, helping students not only learn about the political process, but also learn about making an argument to appeal to people with whom they might disagree.

“I was particularly impressed by the students from Amy Downing’s conservation biology class, who made some great arguments for environmental protection designed to appeal to Republicans,” she says.

Convention organizers also gain valuable experience, Biser adds. “The process provides an opportunity [for students] to learn how to organize a big event, as well as to educate and mobilize their peers. The biggest organizational challenge is figuring out how to appeal to students who don’t even know what conventions are.”

Biser says organizers had a few fun mishaps, such as initially ordering blue pens for a Republican convention. “On the whole the students organizing the convention did a tremendous job. I was particularly excited to have so many faculty from different disciplines participate.”

OWU’s convention runs along the lines of a brokered convention, with no candidate having the majority before the nominating convention. Typically, the national conventions have set nominees, with the number of delegates already allocated during primaries.

The Mock Convention also addresses the party’s platform. Members of the executive committee draft the platform, and delegates are encouraged to make changes. Delegates must learn to follow political procedure and work through red tape, completing a system of amendment forms and obtaining a number of signatures. Any delegate who proposes changes to the platform advocates for the revisions, and the moderator opens the floor to oppose or support the proposal. The delegations then vote “up or down.”

“It was a really great way to learn more about the political process,” says Lee LeBoeuf ’17 a psychology major.

William Louthan, OWU professor of politics and government, has participated in every convention since 1976.

He joined the faculty in June 1972, soon after that year’s convention.

“I heard a lot about it because it was a big, gigantic thing that people were interested in—just so many students and faculty were participating…But I had to wait four years to experience it.”

Louthan, the parliamentarian since his first convention, displayed his political expertise and years of experience at the 2016 convention when the Texas delegation motioned to secede from the Union. Louthan said he would allow it only if Texas understood that its delegates would lose all voting rights if the state succeeded. A laugh erupted in Gray Chapel as the Texas state chair rescinded the motion.

Louthan believes students made the most impressive selection in the 1984 convention, when they nominated a Mondale/Ferraro ticket.

“We nominated Walter Mondale. Now that might not have been surprising because he had been vice president previously. But for our convention here, in the spring of 1984 to nominate [Geraldine] Ferraro, the first and only woman to run on a major party ticket for president or vice president…and for it to actually happen in the real world, that’s pretty impressive.”

Craig Ramsay, a former professor of politics and government and former chair of the department, agrees with Louthan’s assessment of the Mondale/Ferraro ticket.

“We got that one exactly right. Every time I think of both positions that have been correctly predicted by our Mock Convention, that’s what I think of.”

Ramsey’s most memorable delegation, however, was 20 years ago when the Kentucky delegation, headed by Marty Kalb, now a professor emeritus of fine arts, arrived at the proceedings outfitted in Jack Daniel’s hats, vests, and signs obtained from the whisky retailer’s corporate headquarters.

Both Louthan and Ramsey say there is little difference in the number of students participating whether it is a Democratic or Republican convention.

“We have always been able to get the students, no matter what their personal partisan and ideological preferences may be, to find a role they can play in that convention,” Louthan says.

Ramsay notes Ohio Wesleyan used to have a moderate Republican student body, but thinks it’s changed to more Democrat-leaning. OWU students, he says, are “good at playing the role of the party that happens to be out of the White House.”

Spurring an Interest in Politics

Jai Chabria ’99, who studied politics and government and English at OWU, participated in the 1996 convention as a freshman in the Michigan delegation, and returned by request to the 2000 convention.

Now a senior advisor to Governor Kasich, Chabria wasn’t sure about going into politics when he first participated in the convention. He says the convention helped spur his interest in politics, and provided a good entry into what life in politics is like.

“It wasn’t the sole driving force,” he says, “but it was a really fun way to portray something that is a part of Americana and that you take part in it.”

Emily Feldmesser ’16 is an international studies and journalism major and former editor of The Transcript.

The delegates put their rhetorical skills to work.

The delegates put their rhetorical skills to work.