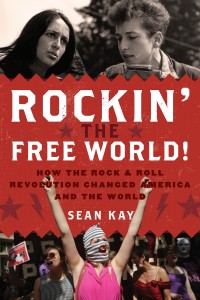 For the paperback edition, Kay, Ph.D., updated the entire book and added the afterword exploring the potential impact of rock music since the election of President Donald Trump in November 2016. The paperback edition will be released Nov. 7 by Rowman & Littlefield Publishers.

“If the question is ‘Can rock and roll make America great again?’ that is easily answered,” proclaims Kay, an expert in global security. “Rock and roll was a fundamental element of what made America great in the first place because it linked individuals to each other and amplified core American values. But the values that rock and roll reflected gained their content and strength from the people. Most of the time, most people figure out ways to get along and find creative and innovative solutions to challenges. Sometimes that can begin with a song.”

Recent examples of the power of music, Kay states, include the aftermath of the February shooting at Florida’s Marjory Stoneman Douglas High School that killed 17 students and staff and wounded 17 others.

“When serious crises demand it,” Kay notes, “the rock and roll ethic can shine—as it did in 2018, when student victims of a school mass shooting in Florida performed an original song for their community: ‘We’re not going to let you win, we’re putting up a fight. You may have brought the dark. But together we will shine the light.’ The rock and roll ethic was strong in these young leaders.”

In the body of “Rockin’ the Free World!” Kay explores how music has influenced issues ranging from racial justice and gender equality to political revolution and anti-war activism.

The book “takes readers inside ‘Bob Dylan’s America’ and shows how this vision linked the rock and roll revolution to American values of freedom, equality, human rights, and peace while tracing how those values have spread globally,” states publisher Rowman & Littlefield. “ ‘Rockin’ the Free World’ then shows how artists have engaged in advancing change via opportunity and education; domestic and international issue advocacy; and within the recording and broader communications industry.”

The book includes interviews with musicians, industry insiders, journalists, and activists including two-time Rock and Roll Hall of Fame inductee Graham Nash, recognized by the hall as a member of both Crosby, Stills and Nash and the Hollies.

“I have children. I have grandchildren,” Nash told Kay. “I’ve got to remain positive. I’ve got to think that I can help make the world a better place for myself and my family and my friends. Everything starts inside, doesn’t it? How far can the ripples go once you throw that stone into the pool.”

“You can get kind of philosophical about it,” said Sears, who now directs a nonprofit organization dedicated to building stronger communities, “but when you look at the intersection of what society was going through – music, alternative viewpoints, social change, environmental awareness – I mean what did Rachel Carson and the Grateful Dead have in common? More than you might think.”

Serj Tankian, lead vocalist for System of a Down, told Kay that it’s important to remain optimistic.

“Ultimately, you can call things as they are – be they realpolitik, realist, and whatnot – and, in the end, depress everyone to death,” Tankian said. “But without telling them, ‘Look, this is a choice’ – that’s very important – giving them the optimism to make that choice and saying that, ‘…it doesn’t have to be this way: War is Over!’ ”

Kay adds in his afterword, “The Beatles ended one of the greatest rock and roll records ever—Abbey Road—with this line: ‘And in the end, the love you take is equal to the love you make.’ Rock and roll has the ability to advance progress on freedom, equality, human rights, and peace. ... It was a simple message that the Beatles offered, but sometimes the simplest message is the most powerful. If it is true that, in the end, love trumps hate and fear, then certainly all you need is love.”

At Ohio Wesleyan, Kay has been a member of the Department of Politics and Government since 1999. He also directs OWU’s International Studies Program and is an associate of the Mershon Center for International Security Studies at The Ohio State University. Kay earned his doctorate in international relations from the University of Massachusetts at Amherst.

His other books include “NATO and the Future of European Security”; “Celtic Revival: The Rise, Fall, and Renewal of Global Ireland”; “America’s Search for Security: The Triumph of Idealism and the Return of Realism”; and “Global Security in the Twenty-first Century: The Quest for Power and the Search for Peace.”

Learn more about Kay and his background at www.owu.edu/seankay. Read more about “Rockin’ the Free World! How the Rock & Roll Revolution Changed America and the World,” at https://rowman.com.