‘The Last Wild Place on Earth’

It’s no secret Ohio Wesleyan is a student’s gateway to the globe. But for five students, a chaplain, and a professor, they could even go to “the last wild place on Earth”: Patagonia.

For two weeks in January, the group traveled on a Theory-to-Practice Grant to Parque Patagonia in the Aysen region of Chile, a branch of the Tompkins Conservation family of national parks. Parque Patagonia was created to preserve the natural biodiversity of an area under attack from human activities. Soon, the privately owned park will be given to Chile and converted into a national park.

The trip was the creation of environmental studies and journalism double-major Olivia Lease ’17 and associate chaplain and director of wilderness ministry Will Hayes. Paul Dean, assistant professor of sociology, helped the students plan individual projects around their areas of study.

In addition to Parque Patagonia, the group got to visit nearby Laguna San Rafael National Park to see the Leones Glacier. Hayes said one of the highlights of the trip for him was the chance to have a picnic on the lakeshore next to the glacier, which few people get to see.

Lease said she was most interested in how the concept of wilderness changes depending on who is speaking.

“Does it include humans? Does the area have to be pristine and untouched? Is that even possible?” she said.

Sizer, who wants to pursue a career in the field of earth science, was able to study human-caused environmental change, both positive and negative, and the related social implications.

“Because of this trip, I was able to create an in-depth cultural geography project that looks at the social boundaries created with Patagonia Park due to the new physical boundaries put up by the park,” Sizer said. “I interviewed a lot of people in my short time in Patagonia. I was able to develop my project, and I was able to better understand the impact this space has on so many travelers, locals, and workers.”

Sizer plans to travel to Ecuador next year to pursue a similar project, and she will use the skills and information she learned in Chile there.

Lease said she was particularly interested in finding narratives and exploring how stories are told in an environmental space. She also loved learning more about how conservation can be put into practice.

“I like hearing what motivates people to care about the earth, whether it be for the sake of future generations, faith-related motivations, or even the idea that it’s the right thing to do,” she said. “Who cares and who decides how we should care for the earth? Is it only the people with money?”

Faith influenced Hayes, who is fluent in Spanish and has traveled to Chile before. He oversaw logistical planning, set up interviews with local sustainable tourism and environmental preservation agencies, and created a hiking and backpacking itinerary.

“Environmental conservation is an issue I care deeply about, and I love to help students make connections between these issues and their faith,” he said, adding that he intends to use what he learned during end-of-the-day discussions to plan future fall and spring wilderness treks at OWU.

Hotaling, whose main interests are park management, cultural history, and Latin American history, said he was particularly interested in how the history of the Chacabuco Valley was presented to tourists. Because the valley is owned privately, the owners can shape the interpretation visitors take from it.

“Visitors, primarily from North America and Europe, do not engage with the history of the land they visit, and do not understand that this parkland is important for other people for different reasons,” he said.

“This trip made me question ‘wilderness.’ My understanding of wilderness had always been the unknown,” Hotaling said. “I questioned this after witnessing 100-year old remnants of a built environment by European-immigrant ranchers, and more so after observing Tehuelche petroglyphs dated 3,000 years old. If people have been familiar with the land for millennia, is it a true wilderness?”

After graduation, Hotaling plans to take the information he learned on the trip and find a career that combines his academic fields and his love of traveling. He would like to move to Ireland eventually.

Hayes said the moment that impacted him most was the group’s final reflection before traveling home.

“I realized that the trip and the experience had exceeded my expectations in terms of the depth of learning we were able realize,” he said. “I understood that to care well for God’s creation and the people and resources in it is a task that requires us to listen well, to act lovingly, and to persevere and put in hard work for the long haul.”

In the spring, Lease plans to stay in Delaware, interning at Seminary Hill Farm at the Methodist Theological School in Ohio. But she’ll carry Chile with her wherever she goes.

“I won’t forget what it’s like to wake to mountains, backpack in Patagonia, and hear from people so willing to open up and share their story,” Lease said.

And Hotaling agrees, and continues to be awed by the experience. “I felt like one microscopic being, humbled by the immense openness of the natural landscape,” he said. “Those are the moments I will always take with me.” 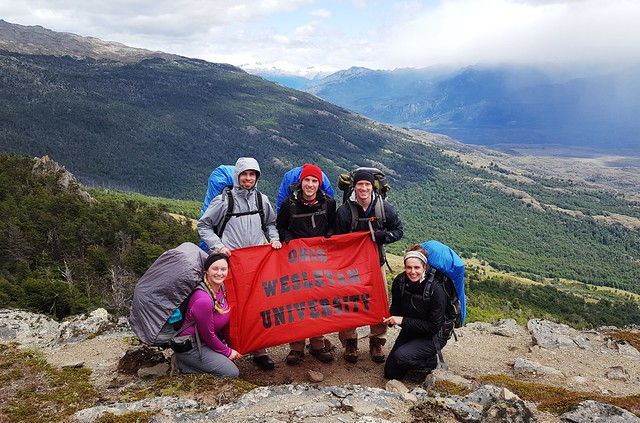