‘The Moment is Now’

Both events featured comments from Korie L. Edwards, Ph.D., associate professor of sociology at The Ohio State University, a leading scholar of race and religion in the United States and past president of the Society for the Scientific Study of Religion.

In her remarks to campus, titled “The Moment is Now,” Edwards noted that King lived by his convictions and “never, ever buckled.”

His famous “I Have a Dream” speech often is represented by the “beautiful vision” of, as King states, a time when “little black boys and black girls will be able to join hands with little white boys and white girls as sisters and brothers,” Edwards said, but the speech also is a call for freedom and justice.

That call also is clear in King’s April 1963 “Letter from the Birmingham Jail,” she said, which includes King’s disappointment that the nation’s white ministers and rabbi were not collectively more supportive of the call for civil rights.

In the letter, King stated: “You deplore the demonstrations that are presently taking place in Birmingham. But I am sorry that your statement did not express a similar concern for the conditions that brought the demonstrations into being. … [I]t is even more unfortunate that the white power structure of this city left the Negro community with no other alternative.”

Edwards said some of those clergy had penned a letter urging the nation’s black population to appeal to the courts and “peacefully abide” a system that, she noted, previously supported killing, beating, segregating, and dehumanizing an entire race.

In her remarks, Edwards urged the audience not to send a message of acceptance of injustice through inaction. The moment for freedom and justice, she said, is now. “Not tomorrow. Not sometime in the undetermined future. But now.”

“Silence is easier, even personally safer,” Edwards said. “Can our fear justify our silence, our inaction? … Perhaps today you have a fierce urgency in you … to speak, to stand, to fight for love and truth.”

The OWU events also featured The Gospel Lyres student musical group performing “Lift Every Voice and Sing,” which encourages listeners to “Lift every voice and sing, till earth and heaven ring, ring with harmonies of liberty.”

Video From the MLK Breakfast Celebration

Photos From the MLK Breakfast Celebration 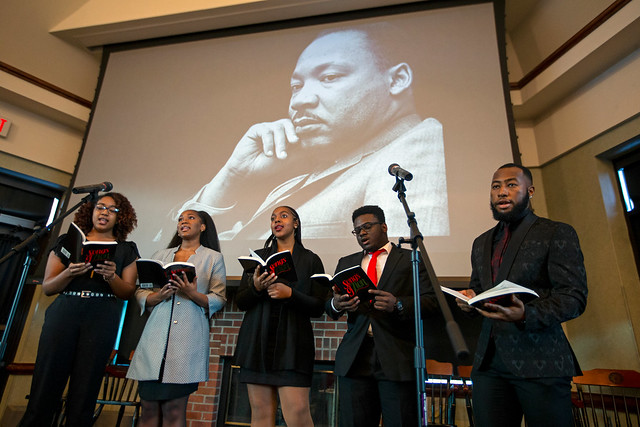