Ohio Wesleyan's Class of 2025 and new transfer students arrived Aug. 19 and celebrated with a Convocation ceremony and First Lap of campus led by the Battling Bishop. (Video by Mark Schmitter '12)

DELAWARE, Ohio – When Ohio Wesleyan University junior Autumn Ford welcomed the Class of 2025 and new transfer students during today’s Convocation ceremony, she made a bold prediction.

“By the time you graduate,” Ford told the new Bishops and their families, “you will be astounded at the growth you have made during your four years at OWU.”

A resident of New Albany, Ohio, Ford is the president of WCSA, Ohio Wesleyan’s student government. She is pursuing a double major in Politics and Government and Pre-Law and a minor in Social Justice.

‘Give Yourself Some Grace’

“When you face obstacles during your four years here, take a second, give yourself some grace, and know you are more than capable to overcome whatever comes your way,” said Ford, sharing that she struggled during her first semester to make friends, handle the academic workload, and keep anxiety at bay.

But, Ford said, “no matter the challenge, I kept pushing forward.”

Today, in addition to being the 2021-2022 WCSA president, Ford also is a member of the women’s volleyball team, a resident of the Citizens of the World small living unit, an elected representative of the Politics and Government Student Board, a member of the Phi Eta Sigma National Honor Society, and a recipient of the Dale Bruce Award as one of Ohio Wesleyan's top 50 student-athletes based on cumulative grade point average.

“If you want to have a college experience like no other, jump out of your comfort zone, and challenge yourself,” Ford concluded. “You will be amazed at what you will accomplish. Class of 2025, your journey begins here. We can’t wait to see the great things you do and the things you will bring to OWU.”

‘An Interesting and Accomplished Group’

Stefanie Niles, Ed.D., vice president of enrollment and communications, officially presented the new class and then shared information about the students to help them get acquainted.

“I imagine you are probably both a bit anxious about the coming days, and eager to start this new chapter of your life,” Niles told the group. “I thought that I might help you mitigate some of that initial apprehension by sharing information about you so you could start to get to know each other. There is no question that – individually and collectively – you are an interesting and accomplished group.”

Niles shared that OWU’s new Bishops include students who:

“The list of impressive accomplishments goes on and on,” Niles said. “You bring many interests, achievements and accolades to Ohio Wesleyan, and our community will be better for your enthusiasm and aspirations. You all have the potential to excel here, and every member of the community looks forward to helping you discover and achieve your goals.”

‘It is the Magic’

“You will be challenged to consider the most complex issues,” Jones said. “By design, some of those questions will be uncomfortable, maybe even disorienting. But that is what education is all about – leaving your comfort zone, asking hard questions, and listening to diverse viewpoints, always with respect for others in the conversation.

Photos from the Day 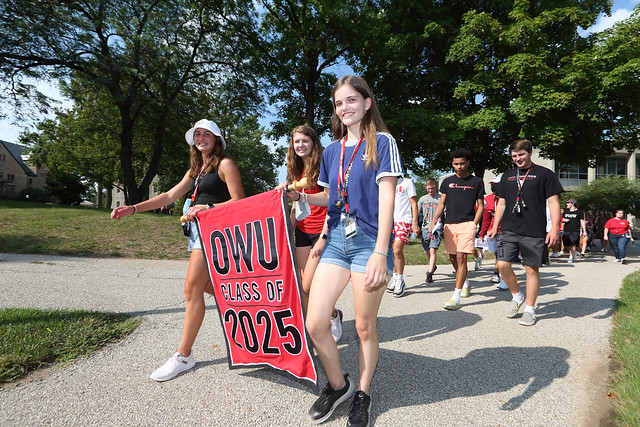 Founded in 1842, Ohio Wesleyan University is one of the nation’s premier liberal arts universities. Located in Delaware, Ohio, the private university offers more than 70 undergraduate majors and competes in 24 NCAA Division III varsity sports. Through its signature program, The OWU Connection, Ohio Wesleyan teaches students to integrate knowledge across disciplines, build a diverse and global perspective, and apply knowledge in real-world settings. Ohio Wesleyan is featured in the book “Colleges That Change Lives” and included on the U.S. News & World Report and Princeton Review “best colleges” lists. Learn more at owu.edu.