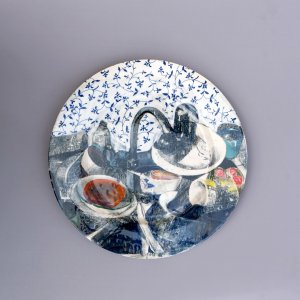 Amy Butcher, director of creative writing and associate professor of English, was voted the “Reader’s Choice” award in the nonfiction category of the 2022 Ohioana Book Awards for her book MOTHERTRUCKER.

Andrea Colvin, associate professor of world languages and cultures, received an OWU Thomas E. Wenzlau Grant that allowed her to spend three months in Chile, doing research that will benefit her classes and her scholarship. Her research involved learning about Chile’s approach to remembering and memorializing the Pinochet dictatorship during the 1970s and 80s, including interviews with filmmakers, former political prisoners, and members of the organization Historias Desobedientes Chile. She also spent time learning about the Mapuche people, Chile’s largest indigenous group, their rich and fascinating history and culture, and the challenges they face today.

Michael Flamm, professor of history, completed a three-year elected term on the Executive Board of the Organization of American Historians, the largest professional association dedicated to the teaching and study of U.S. history. He served as chair of the Finance Committee and the Academic Freedom Committee. Although Flamm finished his term, the OAH invited him to continue to serve on the Finance Committee. The Fulbright Commission also invited him to return to Buenos Aires this summer to co-teach (with John Ikenberry of Princeton University) a week-long seminar for young Argentine leaders on recent U.S. history and foreign relations.

Jeffrey Ford, part-time instructor in English, published three short stories: “Beautiful Dreamer” in the anthology Screams From the Dark: 29 Tales of Monsters and the Monstrous, edited by Ellen Datlow for Tor Nightfire, April 2022; “The Golden Hour” in the anthology Someone in Time, edited by Jonathan Strahan for Solaris, May 2022; and “Gate 9” in the journal Conjunctions:78, Fear Itself, edited by Bradford Morrow, Spring 2022.

Eric Gangloff, assistant professor of biological sciences, published the article “From Performance Curves to Performance Surfaces: Interactive Effects of Temperature and Oxygen Availability on Aerobic and Anaerobic Performance in the Common Wall Lizard” in the journal Functional Ecology, July 19, 2022. In France this June, he also presented two seminars on his research: “Try and Try Again: Temperature-Oxygen Interactions Shape Performance Curves and Thermal Limits in Montane Ectotherms” at the University of Montpellier for the LabEx CeMEB, and at the Station d’Ecologie Théorique et Expérimentale du CNRS for LabEx TULIP.

Will Georgic, assistant professor of economics and business, coauthored the article “A Flood of Construction: The Role of Levees in Urban Floodplain Development” in Land Economics, Vol. 98, February 2022. 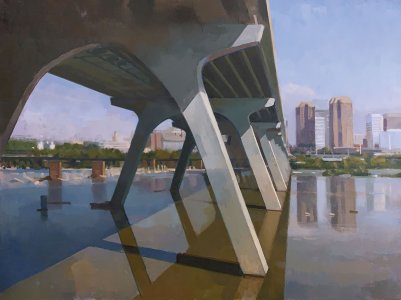 Frank Hobbs, professor of fine arts, will have a solo exhibition of his paintings open November 6 at the Flippo Gallery of Randolph Macon College in Ashland, Virginia. Titled “Outside You,” the show will run through December 16 and will feature landscape paintings of Ohio and Virginia, including the painting pictured above, “James River Highway Bridge, Richmond,” oil on canvas, 36 x 48 inches.

Sarah Kaka, assistant professor of education, published the article “Social Studies Teachers as Instructional Gatekeepers for Issues of Race and Justice,” in The Social Studies. This paper examines data from a statewide survey of K-12 social studies teachers in Ohio regarding their perceptions on the ways in which they integrate issues of race and justice into their classes, or their reasons for not doing so in their role as instructional gatekeeper. She also presented two sessions at the American Association of Colleges for Teacher Education annual conference in New Orleans. With colleagues from across the country, she presented “Examining the Role of Digital Practice Spaces in Teacher Preparation and Clinical Practice in the Aftermath of the COVID-19 Pandemic”; and Kaka and Michele Nobel, OWU assistant professor of education, presented “Building Antiracist Educators: One Program’s Revolution,” sharing their work at OWU to create effective, antiracist teachers.

Chris Modica, assistant professor of psychology, authored (with Sarah Murnen of Kenyon College) the article “Are Men who Identify as a Feminist Less Likely to Sexually Objectify Women?: A Cross-Sectional Study of Heterosexual Men,” accepted for publication in The Journal of Sexual Aggression, 2022. Their study examined whether the degree of identifying as a feminist is associated with engaging in sexual objectification of women among heterosexual men in the United States.

Jeff Nilan, professor of fine arts, and Craig Jackson, professor of mathematics and computer science, gave presentations and presented a poster at two conferences: Generative ART XXIV, in Cagliari, Italy (in-person), and the 20th Annual STS Conference Graz 2022 “Critical Issues in Science, Technology and Society Studies,” in Graz, Austria (online). A peerreviewed full paper will be published by the Graz University of Technology. The presentation, “A Collaborative, Interdisciplinary Undergraduate Course on Generative Art: Past Practice and Ideas for the Future,” described their interdisciplinary collaboration resulting in OWU’s first course on generative art (art in which the artist deliberately cedes control over some significant aspect of their work to an external agent). Students in the class created generative art across a range of 2-dimensional media, both digital and physical. Subsequently, Nilan and Jackson received an OWU Thomas E. Wenzlau Grant to design and build a jacquard-style weaving loom for producing generative art.

Shari Stone-Mediatore, professor of philosophy, published “Chipping Away at the Cement and Imaginary Walls” in Free Inquiry in August/September 2021. The essay explores ideologies that have fueled excessive punishment practices in the United States and grassroots resistance to the practices. She also presented “Using the Humanities to Fight for Justice for People Incarcerated with Long Sentences” at the Illinois Humanities Envisioning Justice Convening in June. Stone-Mediatore also produced the documentary film “In the Way of Healing,” about the meaning of long-term prison sentences for the families and communities impacted by them. She produced the film with support from the OWU Thomas E. Wenzlau fund and the Illinois Humanities Envisioning Justice Initiative.

Brad Trees, professor of physics and astronomy, and Michelle Storms, visiting instructor of physics and astronomy, had a paper accepted for publication in the American Journal of Physics. The paper, “Charging a Supercapacitor through a Lamp: A Power-Law RC Decay,” is intended mainly for physics educators, offering an alternative approach to teaching about circuits with resistors and capacitors. The American Journal of Physics is considered a selective publisher in the area of general physics and publishes just over 10 percent of the articles submitted. The paper will likely be published in fall 2022.

Julide Yazar, Charles L. and Elizabeth Quay Merwin Associate Professor of Economics, authored the article “Bayesian Learning in Oligopoly: The Case of Risk-Averse Agents.” She presented this research paper at the 4th International Conference on Decision Economics, in L’Aquila, Italy, for which she received the Best Application Paper award. In her paper, she presents a novel learning model that extends fictitious play learning to continuous strategy spaces where economic agents combine their prior beliefs with historical market data to model their rivals’ behavior using a normal-inversion-gamma distribution in a Bayesian framework. Her paper will appear in a forthcoming edited volume published by the Computational Intelligence and Complexity AISC series of Springer-Nature.