Exactly 100 years ago, Ohio Wesleyan was six steps from winning the first game at Ohio Stadium. 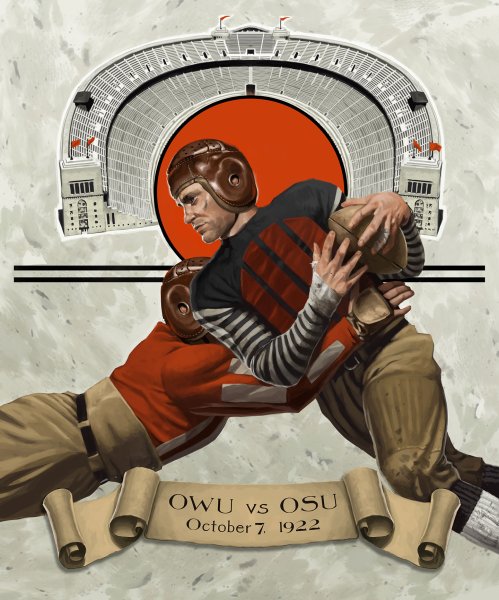 The year was 1922, and the Ohio State football team had a date with that team up north.

That’s right. The big game. The very first game in the history of the famed horseshoe known as Ohio Stadium. And that feared team from up north—about 20 miles as the crow files—from Ohio Wesleyan University was invading Columbus.

While Ohio State may have been overlooking its smaller rival, Ohio Wesleyan nearly upset the behemoth Ohio State on a rainy Saturday, 100 years ago on October 7.

Ohio Wesleyan had yet to be dubbed the Battling Bishops. That nickname wasn’t adopted until 1925 when Pi Delta Epsilon journalism fraternity held a contest to create a nickname. In 1922, Ohio Wesleyan teams were known as the Red and Black or the Methodists. (They weren’t playing the Buckeyes, either. Ohio State didn’t officially adopt that nickname until 1950.)

The Chic Harley era had just ended at Ohio State when the school started constructing the new stadium in 1921. At the time of its opening, Ohio Stadium had a seating capacity of 66,210 and was the largest college football stadium west of the Allegheny Mountains.

Ohio Wesleyan had been a regular opponent for Ohio State. In fact, no other Ohio school has played Ohio State more than Ohio Wesleyan. The two teams first met in 1890 and played 29 times over the years. Ohio Wesleyan won two of those games and tied another.

But few of those matchups were as memorable as the day Ohio State hosted Ohio Wesleyan in what would become one of the most storied stadiums in college football.

“Ohio Wesleyan will always be part of the history of Ohio Stadium for having played in the first game,” said Ryan McGee, a senior writer for ESPN.

According to an account of the game by H.A. Miller, which appeared in the Columbus Sunday Dispatch on Dec. 8, the game was played before 25,000 fans in the “practically completed” stadium.

The story referred to Ohio Wesleyan as the “Delawareans,” and estimated that more than 1,000 Wesleyan faithful made the trip to the game.

The game is legendary in the Winters family. Jack Winters ’61, who lives in Findlay, Ohio,, is the nephew of quarterback Lingel “Sonny” Winters ’23, and Jack’s father, Jay Winters ’26, attended the game as a member of the freshman football team. Jack says he heard stories about the big game from his father.

To get to the game, Jack says the Ohio Wesleyan team took the Columbus Delaware & Marion Railway’s interurban car, known as “the Red Bird.” They got on the interurban in Delaware, exited at a station near Lane Avenue, and walked to the stadium, carrying their equipment. They returned home the same way.

While freshman were ineligible to play in those days, Jack says Coach George Gauthier dressed all the freshmen for the game to create a more imposing sideline against Ohio State.

In the first quarter, Ohio State blocked an Ohio Wesleyan punt that resulted in a safety, and Ohio State took a 2-0 lead. Later in the quarter, All-American quarterback Hoge Workman added a 20-yard dropkick field goal for Ohio State, which took 5-0 lead.

Miller wrote that the first period “gave the impression that the annual visitor from Delaware were in for their usual defeat of somewhat one-side proportions.”

However, Ohio State would not score again.

Unfortunately, neither did Ohio Wesleyan.

The game held little resemblance to today’s wide-open college football. Ohio State earned 13 first downs, compared to four by Ohio Wesleyan. There were only nine passes in the entire game, with each team completing one. The two teams combined for 37 punts. Sonny Winters punted 20 times for a 35-yard average for Ohio Wesleyan.

Descriptions like “defensive struggle,” and “fight in the muddy trenches” come to mind. Woody Hayes might have loved it.

According to the newspaper account, Ohio State controlled the tempo, but Ohio Wesleyan continually kept them out of the end zone. Miller wrote, “They did fight every inch of the way. Their defense was not always consistent, but when the last entrenchments were about to be penetrated, the Methodists did stand their ground and throw back the Scarlet and Gray.”

One of the highlights of the rainy day occurred in the third quarter when a rainbow appeared in the overcast sky, which “many read as an omen of promise for the greater battles that are to follow.”

When the Red and Black stopped Ohio State deep in Ohio Wesleyan territory in the fourth quarter, Miller wrote, “This was quite a defensive feat and called for leather lunged cheers from the Delaware rooting section.”

Ohio Wesleyan’s chance to win the game occurred in the fourth quarter after a muffed Ohio State punt put the Red and Black “in really good striking distance.”

The article further stated, “Winters, about the only offensive star in the Wesleyan backfield, here scented possible victory and he became a demon in attack.”

Winters ran twice for 8 and 2 yards, and Ohio Wesleyan had the ball on the Ohio State 6-yard line, first-and-goal. Only six yards from a possible game-winning touchdown.

Then the dream began to unravel.

OWU was then assessed a 5-yard penalty for being “too eager,” which was probably how sports reporters described illegal procedure in 1922.

At this point, things become a little blurred in Miller’s account. Ohio Wesleyan attempted a “goal from placement.” Or, in modern parlance, a field goal. Miller described the attempt as “a miserable failure.” However, Ohio State was offsides and Ohio Wesleyan was given the ball, first down, on the Ohio State ten-yard line.

However, Wesleyan was again unable to convert. Five- and 10-yard losses, along with a pass attempt that was “another miserable failure,” and Ohio State soon had the ball back.

“The visitors had shot their bolt,” Miller wrote. Ohio Wesleyan got the ball back deep in their own territory as the game ended, 5-0.

In the aftermath of the game, Ohio Wesleyan received a lot of love from its hometown papers. The Ohio Wesleyan Transcript ran its front-page story under the banner headline:

The Delaware Journal-Herald took it a step further. The lead in the front-page story read, “Ohio Wesleyan won her greatest football victory in ten years at Columbus Saturday.”

The fact that Ohio Wesleyan had kept Ohio State from scoring a touchdown prompted the Journal-Herald to declare victory. The article stated that the Red and Black was “able to start her Ohio Conference schedule knowing that she has an unstained goal line to defend.”

While the newspapers swooned over what their reporters perceived to be a moral victory, ESPN’s McGee said he is certain the Ohio Wesleyan players didn’t share that sentiment.

“I can tell you for a fact that the members of that 1922 Ohio Wesleyan team remembered how close they were to winning that game for the rest of their lives,” McGee said. “It’s nice to be part of history, now, but I have no doubt that those Ohio Wesleyan boys were not happy that they didn’t get the win. How many times has Michigan come into that stadium and had their hearts broken? The 1922 Ohio Wesleyan team could relate. Gotcha, dude. We know how you feel.”

The hometown Journal-Herald took a swipe at the Columbus newspapers for their coverage of the game. “Columbus papers Sunday gave Wesleyan credit for part of her play, but did not hesitate to diminish the glory she really deserved.” 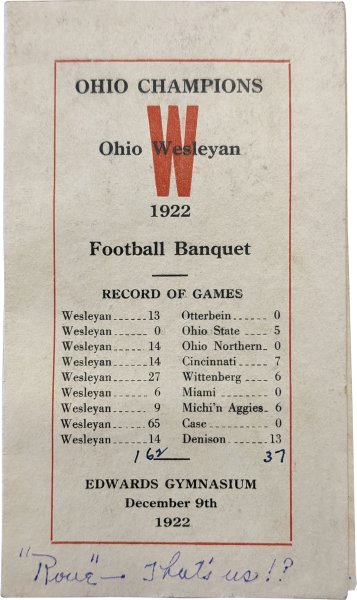 Interestingly, former Ohio Wesleyan head football coach, Fielding “Hurry-Up” Yost, attended the game. In 1922, Yost was the head coach at Michigan. But in 1897, his only season at Ohio Wesleyan, he led the Red and Black to a 7-1-1 record, which included a 6-0 victory over Ohio State and a scoreless tie against Michigan.

The future Hall of Fame coach came to Columbus to scout Ohio State with quarterback Irwin “Utz” Uteritz and team captain Paul Goebel. Scouting an opponent might not have been that unusual, but Michigan actually had a game that day. Yost took two of his best players and headed to Columbus, leaving his assistants to coach against Case School of Applied Science of Cleveland. Michigan battered Case, 48-0, so apparently, they weren’t missed.

In his article, Miller speculated that the Michigan trio were “secretly chortling” about Ohio State’s inability to score a touchdown against Ohio Wesleyan.

While it was the first game in the Ohio Stadium, the only front-page mention of the game was in a story about John Storm, a prison trustee from the Ohio Penitentiary who had been working at the game and decided it was an excellent time to escape. According to the newspaper account, 83 prison inmates were brought in to clean up around the stadium. In exchange, they were permitted to watch the game.

Storm, of Stark County, had been in prison a year for grand larceny. According to the Dispatch account, “The rest of the prisoners were true to their word and could not be called quitters. But the devious aisles of the stadium, the flurry ensued by the rainstorm and the interests of the game must have been too great a temptation for the lone untrustworthy trusty” (sic).

While Ohio Wesleyan was the first opponent in Ohio Stadium, Ohio State elected not to dedicate the stadium until two weeks later, Oct. 21, before the game against Michigan.

“The fact that they didn’t dedicate the stadium until the Michigan game tells you they were dismissive of Ohio Wesleyan,” McGee said. “Typical big brother-little brother relationship. How sweet would it have been for Ohio Wesleyan to have upset Ohio State in the first game at the horseshoe?”

Oh, that rainbow that was mentioned earlier? Maybe it was intended for the Red and Black. After the loss to Ohio State, Ohio Wesleyan went on to win eight consecutive games and capture the Ohio Athletic Conference championship with a perfect 7-0 record. The 1922 season launched a string of 14 consecutive winning seasons for Ohio Wesleyan.

Robin Yocum is a Delaware County resident and the author of six novels, including The Sacrifice of Lester Yates, and was a finalist for the Dashiell Hammett Award.