The Power of Sociology

Thanks for reviving the magazine! Through the Fall 2021 issue I learned of the passing of Sue Lynn Meck Bender, my classmate, good friend, sorority sister, and resident of the same freshman corridor in Austin Hall in 1963-64. We both majored in elementary education, in which Sue Lynn excelled. She also majored in microbiology, one of the first women I knew to do so.

After graduation, she worked in a lab related to her second major, where she met her future husband. They had three children, and developed a successful photography business. For our 55th reunion, after speaking with Jenny Batchelder, Director of Gift Planning at OWU, I decided to dedicate my donation of $1967 in Sue Lynn’s memory. Though unable to attend the reunion in person, I do feel as though I am there in spirit! Coincidentally, the Spring issue of OWU Magazine arrived today, Saturday, May 14, Reunion Weekend!

Regarding the magazine itself, I would like to comment on the articles on mental health in the current issue. While excellent, I am disappointed by the lack of reference to the field of professional social work. While at Ohio Wesleyan, I participated in many volunteer projects sponsored by the Red Cross, Student Y, the Methodist Student Movement, and the Religious Life Office. It was not until fall of my junior year that I discovered sociology. I went on to take three more courses in that department, including fieldwork in social welfare. Dr. Butler Jones taught the first three, Abbey Seamans the latter.

After graduation, I spent a year in VISTA, taught for a year, then became a social worker in the field of child welfare. I earned my master’s in social work, obtained my license in clinical social work, and have worked in a variety of settings with diverse populations.

While Ohio Wesleyan did introduce me to social work, it was not my focus then because I did not know it existed as a profession—or the multitude of opportunities available for social workers. It seems to me that social work education is a natural for a liberal arts, value-based university to offer as part of their curriculum. Yes, Ohio Wesleyan does offer a major in psychology, and did when I attended, but social work and psychology do differ in important ways, although they complement each other.

I would love to pursue this thought further if anyone is interested!

Again, thank you for reviving the magazine!

It was so encouraging to see the feature article on the mental health crisis, “A Second Pandemic,” in the Spring 2022 OWU Magazine! Especially in light of the work I do with a unique nonprofit in Charlotte, NC, called Psychology For All. PFA seeks to increase mental health awareness and make therapy more accessible to the uninsured and underinsured by paying for clients that meet our eligibility criteria.

Having seen the increase in the use of our services since the pandemic, and the partnerships we’ve been able to create with agencies and clinicians, I wonder if there are additional creative ways to meet this growing need.

I’m grateful to have found a place where I can combine my background in psychology with my skills and love of administration, and I hope other liberal arts graduates continue to put their critical thinking skills towards tackling this second pandemic.

Love the magazine. So glad it is back. A couple of items:

William Batchelder. Although he graduated several years before I arrived, he was a legend in the debate program coached by longtime speech professor Ed Robinson. Professor Robinson used to regale us with stories about Bill and his teammates. I don’t know if OWU still has a debate program, but it had a great tradition and was great preparation especially for a legal career. After graduating from OWU in 1971 and from Michigan Law School in 1974, I had occasion to work in the Ohio Legislature for a couple of years as a staff attorney. There I had the opportunity to observe Bill in his element, where he was an outstanding legislator as noted in the article.

Nursing. I was glad to learn about OWU reestablishing this program. Actually I first found out about it at a recent Rotary Club meeting where we had some outstanding students from our St. Marys high school. A young lady announced that she would be attending OWU this fall. I understand that she will be playing basketball for the Bishops. When I inquired, she stated she would be in the nursing program, which surprised me, as I was unaware that OWU had reinstated that program. I told her I would like to come down and watch her play sometime.

Editor: While OWU does not currently have a debate team, our Moot Court program has been strong for several years, with students receiving awards at the national and regional levels. Politics & Government Professor Michael Esler directs the program.

I would like to share my thoughts regarding your article on the OWU accomplishments in the area of women’s sports. In the fall of 1973, I joined the faculty at the State University of New York at Fredonia. As a person who participates in sports and someone who understands that collegiate participation has a positive influence on college life, not to mention graduation rate, I joined and soon led the Intercollegiate Athletic Board (IAB). In 1973, every IAB faced an interesting challenge: how to achieve a balance of the men’s and women’s sports programs. At the time Fredonia had both men’s and women’s soccer and basketball teams. We had men’s baseball but no women’s softball. We also had a men’s hockey team, which was eventually balanced with a women’s lacrosse team. We worked to realize the goals of Title IX.

As the OWU Magazine relates, OWU was also working on the goals of Title IX.

Having pointed out OWU’s important progress in the area of women’s sports and how the participation in sports has had a positive impact on one’s life, the article continues toward conclusion with the following idea: “Soccer Academic All-American Dr. Sarah Wall ’06 acknowledges the massive success of Title IX while also seeing opportunities to make athletics more inclusive.” She adds, “We’re in a new era now when LGBTQ and non-binary athletes are trusting others with publicly being themselves, but our framework for sport is often not inclusive. I hope that women athletes who benefit, or previously benefited, from Title IX will be advocates and partners for creating an equal space that includes transgender and non-binary athletes.”

In essence, Dr. Wall would like to have men competing in women’s sports programs. In effect, Dr. Wall would like to turn back the clock and to destroy all the work that has been done by myself and many others to ensure the integrity of women’s sports and the positive influence on life’s journey. Consider Captain Juliann Althoff ’91. She said, “Sports have played a huge part in my life, not only in college, but beyond.” Althoff was OWU’s first woman two-sport All-American (swimming and high jump). If Captain Althoff were to be competing in the environment Dr. Wall advocates, it is quite possible that she would have never won a swimming race nor cleared the highest bar. I suspect that the “huge part” in her life would have been quite different. 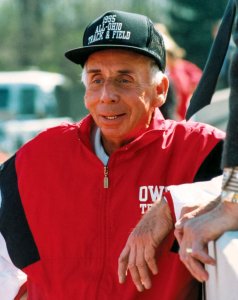 As a high school senior I visited the campus and met with Marv Frye. Within minutes, he cried.

The bombing of Pan Am Flight 103 over Lockerbie, Scotland, killing Tom Schultz of Ohio Wesleyan and 269 others, was still fresh in his mind. Marv could barely get a sentence out about OWU’s track program before telling me about Tom. It’s so cliché I’m embarrassed to write it, but Marv’s coaching success was about people as much as it was about sports.

Pan Am Flight 103 was in 1988; I started in 1989. I felt surrounded by an unreal amount of talent. We had transfers from Division I schools, a future NFL player, and brought home the first conference championship in I believe three decades of coaching for Marv at that point. Per tradition, we tried to pour an oversized Gatorade container over his head, but Marv, an ex-football player, stiff-armed it. I have the photo of the team here on my desk; Marv inscribed it “NCAC Champions. In Memory, Tom Schultz.”

Track and field, especially indoor, was more than just track. Friday nights we would get a free pizza buffet after indoor meets. For a college student with no money, this was like a weekly treasure chest. Marv would redundantly explain each week that we could have as much as we want, a message that I took to extremes.

Then came Desert Storm. My teammate Mike King, a top sprinter who had mastered how to handle the curves in Branch Rickey, was headed off to the Persian Gulf. Marv, appropriately, treated him like a, well, a king, and gave him a send-off dinner with all of us together. This was the beginning of the war, when we didn’t know how long it’d take and if Mike would return, so the send-off left none of us with dry eyes.

There was so much talent congregating in Branch Rickey that I asked Marv one time in his office whether he had ever been asked to coach at a bigger or more prestigious university. He told me he had many opportunities to do that but there was nothing bigger than what he was doing.

Editor: OWU coaching legend Marv Frye died July 17 at the age of 93. Above is one of the letters sent by alumni remembering him.

Use the Your Thoughts form, email us at magazine@owu.edu, tweet @OhioWesleyan, or send us a letter:

Letters may be edited for length and clarity.