DELAWARE, Ohio – “Finding Joy on the Loneliest Road in America.” As the subtitle of Amy Butcher’s new book, “Mothertrucker,” the statement is deceptively simple.

On the surface, it refers to Joy Wiebe – Instagram’s “Mothertrucker” and the only woman driving a fuel tanker on northern Alaska’s treacherous Dalton Highway before she was killed in a rollover accident on the remote road in 2018.

But “finding joy” also reflects Butcher’s journey to understand and escape from the isolating issue of intimate partner violence.

Ohio Wesleyan University’s director of creative writing, Butcher contacted “Mothertrucker” Wiebe after viewing her images and captions on social media. The women quickly bonded, and Butcher flew to Alaska to ride shotgun as Wiebe drove the 414-mile highway and shared the story of her life. Their conversations, especially those about intimate partner violence, form the framework for Butcher’s new book, scheduled for release Nov. 1 by Little A Books.

‘The Broader Spectrum of Abuse’

“This book is political, and it is personal,” said Butcher, an OWU associate professor of English. “I wanted to write a book that profiled a strong woman, but in so doing, I learned one of the reasons she was so strong was because, in short, she had to be, which is true of so many women.

“Intimate partner violence is an epidemic in this country, and I want this book to raise visibility about how frequently it occurs and the individuals it most affects,” Butcher said. “But I also want this book to speak to the broader spectrum of abuse; there are a lot of ways to inflict violence on a person, and not all of them are physical. This book speaks to the psychological and mental effects of abuse that is not only physical, but verbal, emotional, and financial in nature.”

‘Heart and Humor and Love’ 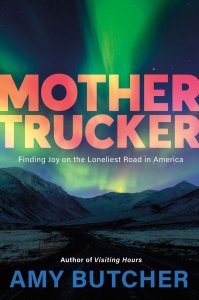 Even before its official release, “Mothertrucker” was named an Amazon First Pick selection for the month of October, and it became Amazon’s No. 1 bestseller in the memoir, travel writing, and feminist theory categories. In addition, Audible’s fall preview named Butcher’s book as one of “the most anticipated listens of the season.”

Butcher herself, after an audition among professional voice actors, was selected to record the audio version of her memoir, also set for release Nov. 1.

“I genuinely can’t imagine anything more empowering than getting to read aloud those words – which I’ve spent years on, quietly – and, in this way, reclaiming my narrative, my story,” said Butcher, who joined the Ohio Wesleyan faculty in 2014. “It is profoundly powerful to get to tell my story with heart and humor and love.”

‘A Searching and Deeply Empathetic Memoir’

In addition to its Amazon and Audible success, “Mothertrucker” has earned accolades from Publisher’s Weekly, which called it “tender and gripping,” stating, “[Mothertrucker] explores myriad issues with nuance and grace, including Indigenous rights, violence against women, religious hypocrisy, and environmental concerns.”

Kirkus Reviews also recommends the book, describing it as “a searching and deeply empathetic memoir” and “a sobering reflection on verbal and psychological abuse.” According to the popular outlet, “Butcher’s book honors the healing power of female friendship and questions the nature of divinity beyond its constricting patriarchal manifestations.”

A companion essay to “Mothertrucker,” reflecting on the recent murder of 22-year-old Gabby Petito and the epidemic of intimate partner violence, was published recently as a “Guest Essay” in The New York Times.

Even while she was still writing “Mothertrucker,” Butcher earned an Individual Excellence Award from the Ohio Arts Council, with judges deeming her initial work “well researched,” “very well-written,” and “a positive antidote to the trauma of violence against women.”

In addition, the book already has been optioned for a feature film, though the coronavirus has altered the original production timetable. Primetime Emmy-winning director Jill Soloway (they/them) has been tapped to direct the project, Academy and Golden Globe-winning actress Julianne Moore to portray “Mothertrucker” Wiebe, and Beanie Feldstein to play Butcher.

In addition to “Mothertrucker,” Butcher also is the author of “Visiting Hours: A Memoir of Friendship and Murder,” and her essays have appeared in outlets including Harper’s, The New York Times, Granta, The Washington Post, The Denver Post, The American Scholar, and Lit Hub. She holds a Master of Fine Arts degree from the University of Iowa.

Learn more about Butcher, Ohio Wesleyan’s Department of English, and its creative writing concentration at owu.edu/English.

Founded in 1842, Ohio Wesleyan University is one of the nation’s premier liberal arts universities. Located in Delaware, Ohio, the private university offers more than 70 undergraduate majors and competes in 24 NCAA Division III varsity sports. Through its signature program, The OWU Connection, Ohio Wesleyan teaches students to integrate knowledge across disciplines, build a diverse and global perspective, and apply knowledge in real-world settings. Ohio Wesleyan is featured in the book “Colleges That Change Lives” and included on the U.S. News & World Report and Princeton Review “Best Colleges” lists. Learn more at owu.edu.