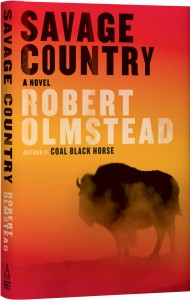 DELAWARE, Ohio – In reviewing Ohio Wesleyan University professor Robert Olmstead’s new novel, author Tom Franklin writes: “Robert Olmstead gets better with every book. If you know all of his previous books, you know how startling this fact is, and how startlingly good this writer is.”

Olmstead, professor of English and director of creative writing, is the author of eight books, including “Savage Country: A Novel,” set to be released Sept. 26 by Algonquin Books.

Set in 1873, “Savage Country” tells the story of newly widowed Elizabeth Coughlin and the buffalo hunt she undertakes with her estranged brother-in-law, Michael, in an effort to save her land and lifestyle.

“What follows,” Kirkus Reviews states in its starred review, “is a story about America told through its land and its animals and its diverse people and, especially, through the experiences of two vivid, singular, powerful characters. Another gorgeous, brutal masterpiece from a great American writer.”

Olmstead, who joined Ohio Wesleyan’s Department of English in 2002, is the author of five novels, including a trilogy of historical fiction that comprises “Coal Black Horse,” winner of the Heartland Prize for Fiction; “Far Bright Star,” winner of the Western Writers of America Spur Award; and “The Coldest Night,” a finalist for the Dayton Literary Peace Prize, a Publishers Weekly Best Book of 2012, a Kirkus Reviews Top 25 Fiction Book of 2012, and an Amazon Best Book of 2012.

“Far Bright Star,” which tells the story of a U.S. cavalry’s search for Mexican Revolutionary Pancho Villa, is being made into a feature film starring Joaquin Phoenix and directed by Casey Affleck.

Of “Savage Country,” Olmstead says: “Again, I find myself deep in history, trying to make sense of what life is today. Then as now, we live unfolding dramas that are quite often mysterious to us as we experience them. Then as now, some of us have choices. Most do not. We do the best we can however dire the circumstances, however extreme the challenge to our survival. The question is always, ‘What price are we willing to pay?’ ”