‘The Best Is Yet to Come’

A junior from Dayton, Ohio, Gipson spoke to Ohio Wesleyan’s Class of 2026 and new transfer students during the university’s Aug. 18 Convocation ceremony. The Dayton, Ohio, resident also is president of the Wesleyan Council on Student Affairs, OWU’s student government.

‘The Best Version of Myself’

“Not once did I ever imagine myself pursuing a double major in Politics & Government and Sociology & Anthropology, and I surely never expected to become the president of the student body speaking here today,” Gipson said. “And even though I didn’t plan for any of this to happen, I am so grateful that it did.

“While your involvement and goals may change, and your path won’t stay linear, the system of support you have here at Ohio Wesleyan will always remain constant,” Gipson told OWU’s newest Bishops. “I can speak from experience, as some of my greatest and biggest supporters sit in this space today and have never stopped encouraging me to be the best version of myself, even when I had no idea who she was going to be.”

‘An Accomplished and Fascinating Group’

Laurie Patton, director of admission, officially presented the new class and shared information about the students to help them get acquainted.

“Thirty-one years ago, I sat where you sit for my first day as a student at Ohio Wesleyan,” said Patton, a member of the OWU Class of 1995. “And parents, I also know how you feel. Twice now, I have sat where you are – on the edge of my seat searching for my own children in the sea of new students seated together, hoping to catch a glimpse of them to make sure they were smiling and ‘fitting in’. And I can say from that experience, students and parents, you are going to be fine!

“Here in front of me,” Patton continued, “is an accomplished and fascinating group of young adults, who have made it through a global pandemic, and they’re ready for a great new stage in their life! To help you get to know more about those around you, I thought I would share some information about you – our new transfer students and the members of the Class of 2026.”

‘Many Talents and Aspirations’

“You bring many talents and aspirations to Ohio Wesleyan, and our community will be better for your contributions,” Patton said. “And the best is yet to come.”

Ohio Wesleyan President Rock Jones, Ph.D., also spoke to the incoming students, welcoming them to a university committed to making a positive difference in the world since 1842.

“What can we say except ‘Wow?’” Jones told the Class of 2026. “What an accomplished group and how fortunate we are today to have you join the Bishop family. …”

Translated, she said, the Latin phrase means “In Your Light We Shall See the Light.”

Photos From the Day 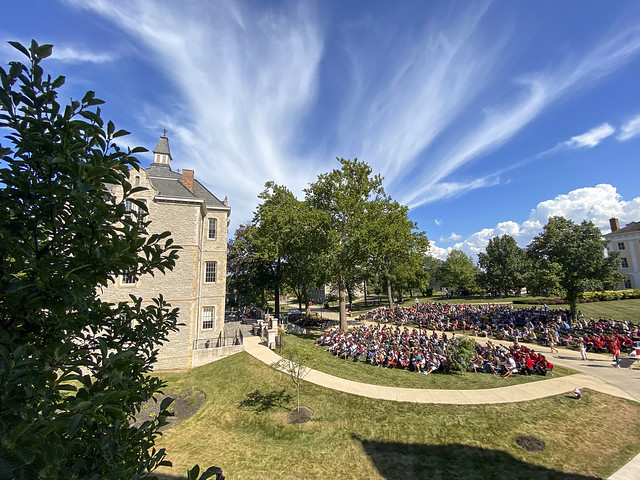 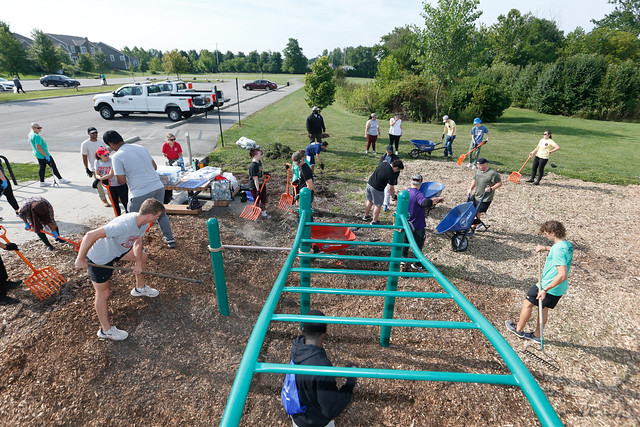 Founded in 1842, Ohio Wesleyan University is one of the nation’s premier liberal arts universities. Located in Delaware, Ohio, the private university offers more than 70 undergraduate majors and competes in 24 NCAA Division III varsity sports. Through its signature program, the OWU Connection, Ohio Wesleyan teaches students to integrate knowledge across disciplines, build a diverse and global perspective, and apply knowledge in real-world settings. Ohio Wesleyan is featured in the book “Colleges That Change Lives” and included on the U.S. News & World Report and Princeton Review “Best Colleges” lists. Connect with OWU expert interview sources at owu.edu/experts or learn more at owu.edu.