OWU has offered two different courses for students to study Shakespeare's plays and then travel to England to experience them in person.

One Shakespeare Travel-Learning Course examined Shakespeare's life in theatre through the lens of the various sites where his theatre company performed, from the inn yards of country villages to the great halls of royal palaces. Another class focused more closely on the Globe Theatre in London, the most famous of Shakespeare’s playhouses. Both have taken students not only across the pond, but also back in time to Shakespeare's England. 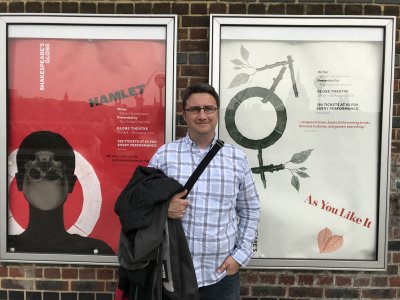 Associate Professor of English Zack Long says, "Some of my happiest moments as a Shakespeare scholar have been in reconstructions of Renaissance playhouses, like the Globe Theatre in London and the Blackfriars Theatre in Staunton, Virginia, watching Shakespeare’s plays brought to life in conditions as close to those of his own time as possible. Travel-Learning Courses are a wonderful opportunity to share these experiences with students, bringing them as close to Shakespeare’s physical and imaginative world as possible."

We walk the very streets and, in some cases, the very boards that Shakespeare and his fellow actors tread four-hundred years ago. Squint your eyes and it’s 1599!

Shakespeare: A Life in Theatre

How did the son of a glove-maker from a provincial English town become the greatest playwright of the English Renaissance? This course examines Shakespeare’s life in the theatre, from his childhood performances in grammar school to courtly performances before the monarch. We will study Shakespeare’s development as an actor, playwright, and entrepreneur, taking special note of the people, places, and historical trends that shaped his career, as well as the underlying social, cultural, and economic conditions that made this career possible. The course will culminate in an eight-day trip to England to retrace the journey of Shakespeare’s life in the theatre for ourselves, from his birthplace in Stratford Upon Avon, to the London neighborhoods where he worked, to various cities across England where he performed on tour with his theatre company.

Shakespeare and the Sites of Performance

Shakespeare's plays were originally performed in a variety of venues, from the large, circular, open-air Globe Theatre, where works such as Hamlet and Henry V were staged, to the intimate candlelit interior of the Blackfriars Playhouse, where late masterpieces like The Winter's Tale and The Tempest were mounted. This course retraces the trajectory of Shakespeare’s career from country player to courtly entertainer by looking at the various stages he performed on and the occasions he performed for. The course culminates in an eight-day trip to England to see and experience these performance spaces for ourselves, while visiting nearby sites of historical interest in London, the English countryside, and at Cambridge University.

Shakespeare at the Globe

The most famous of Shakespeare’s playhouses was the Globe Theatre, where works such as Henry V, Hamlet, and As You Like It were originally performed. This course explores the staging practices, acting styles, and performance conditions of Shakespeare’s Globe, with special focus on the research and findings of scholars and theatre professionals working at the reconstructed Globe Theatre in London. The course culminates in a weeklong trip to the reconstructed Globe, where students see plays, attend lectures, and participate in workshops led by Globe Education scholars, actors, and theatre professionals, while also touring sites of Shakespearean interest in London.

Touring in Stratford Upon Avon

Touring in Stratford Upon Avon

The Globe Theatre in London

The Globe Theatre in London

2013 "Shakespeare at the Globe" class

2013 "Shakespeare at the Globe" class

Panel discussion with actors from the Edwards' Boys Theatre Company

Panel discussion with actors from the Edwards' Boys Theatre Company

Shakespeare's schoolroom in Stratford Upon Avon

Shakespeare's schoolroom in Stratford Upon Avon