For the past 18 years, Shane Andrews has been helping to build a better Ohio Wesleyan University.

For his considerable handyman and people skills, and for his willingness to happily help anyone in need at any time, Andrews has earned Ohio Wesleyan’s 2022 Special Thanks and Recognition (STAR) Award. OWU’s most prestigious staff award, it is presented annually by Staff Council and Department of Human Resources.

“Although I give him special thanks and recognition every day, I guess it’s time to do it publicly,” Jay Scheffel, Andrews’ Buildings and Grounds boss, told the crowd at the Jan. 17 award announcement and staff celebration event.

OWU’s supervisor of buildings and trades, Andrews began working at the university as a contractor before being hired as a B&G staff member in 2007, said Scheffel, who serves as interim director of physical plant.

“I did a little research and since then, Shane has seen 12 complete building renovations, four partial renovations and seven brand new buildings,” Scheffel said. “For each event, he had to locate and stock new material and parts, such as door hardware, paint, carpet, ceiling tiles. He has most of this memorized.”

Andrews’ current duties also include working on special projects such as student move-in and move-out, Reunion Weekend, and commencement.

“He’s the face of B&G for all these events, accommodating in any way he can, always reachable, and representing our division with pride,” Scheffel said.

“What you don’t see, though, is the invisible work he accomplishes – the whiteboard hung when you walk in, the wall repair and painting that just happens, the stained ceiling tile that’s replaced,” Scheffel said. “He’ll be in at 4 a.m. to get this work done so you’re not interrupted during the day. He’s also on call 24/7 for any emergency, from broken windows to freeze-ups. He’s more than building trades and jumps in anywhere needed.”

Andrews accepted the award with his ever-present smile, sharing that his biggest joy is getting to work in all areas and with everyone on campus including students, faculty, and staff.

“For those of you who know me, I’m a people person,” Andrews said. “I enjoy working with every one of you.”

Along with the STAR award, Staff Council and Human Resources gave out a new award at the celebration – a Service Partner Award, created to recognize someone not technically employed by Ohio Wesleyan but a valued and valuable member of the campus community.

The first Service Partner Award was presented to William Hayes, associate chaplain, who has worked on campus for 13 years in partnership with the Pittsburgh, Pennsylvania-based Coalition for Christian Outreach. OWU’s relationship with the coalition spans more than 30 years.

At Ohio Wesleyan, Hayes works to support student success by serving as the director of Wilderness Ministry. He also is serving as a co-chair of the committee working to improve the first-year student experience as part of OWU’s Moving the Needle initiative, launched to help students thrive and persist to graduation.

Also during the staff celebration, employees were recognized for service milestones occurring anytime during the past three years. The expanded timetable ensured those whose accomplishments couldn’t be recognized in person during the pandemic also were honored.

Harold Wiebe earned a standing ovation for his milestone 50 years of service to the University as both a professor of Mathematics and Computer Science and as a staff member, serving Information Services as its network and Linux systems administrator.

Wiebe’s honor was announced by Staff Council member and head football coach Tom Watts, who introduced him as “the man, the myth, the legend – Harold Wiebe.”

The following staff also were recognized for reaching service milestones during the past three years: 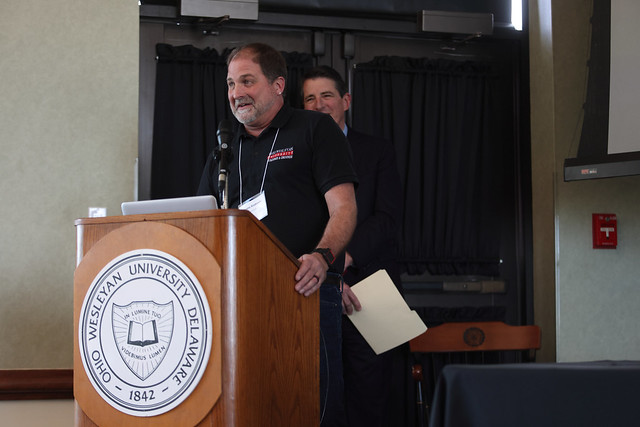