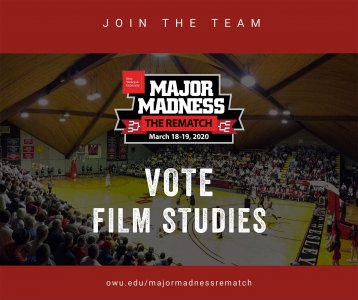 INTRODUCTION TO THE PROGRAM

Film production fuels a $36 billion industry, and the growth of the Internet has made film a vital medium for 21st-century communication. Film is an art form and a news medium. Much of what we know about people, places, and cultures, both past and present, comes through film.

Ohio Wesleyan's interdisciplinary film studies program brings together faculty from literature and comparative literature, global studies, creative writing, multimedia production, theatre, and other fields to help students understand how motion pictures are produced and gain a rich knowledge of cultural, political, and economic contexts to analyze a wide range of moving images, from advertising and propaganda to prime-time programming and news footage.

The interdisciplinary film studies major gives you the knowledge and skills to become an adept analyst of film. Many options are available to complete the 10 required courses, in areas such as English, art, French, journalism, philosophy, and theatre.

Professor Olmstead's novel Far Bright Star is being made into a Hollywood film.