Walking the 177-mile path along one of the longest human-made earthworks in the world, four students and two faculty and staff members explored the environment, geography, and village and rural life along the border between England and Wales, examining how people have adapted to the land and how the land has influenced literature and history from the bronze age through medieval and renaissance times, through the industrial revolution, and into the modern era. 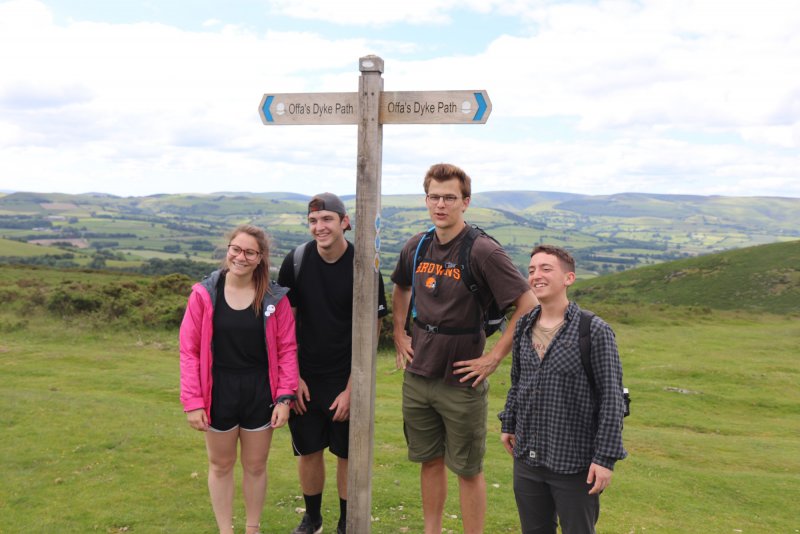 "The Offa’s Dyke walk was one of the most impactful educational experiences of my life, one that I shall never forget."
- John Keller '19

Offa’s Dyke is a 150-mile earthwork built in the 8th century and named for Offa, the Anglo-Saxon king of Mercia from CE 757 until 796 who is believed to have ordered its construction. Offa's Dyke delineated the border between Anglian Mercia and the Welsh kingdom of Powys, and today, it largely follows the border between England and Wales.

The 177-mile Offa’s Dyke Path stretches from Severn Estuary at Sedbury in the south of Wales to Prestatyn on the north coast. The path crosses a variety of landscapes and geographic features preserved by the United Kingdom as Sites of Special Scientific Interest or Areas of Beauty, including the Black Mountains, the Shropshire Hills, the Wye River Valley, the Eglwyseg escarpment and moorland, and the Clwydian Range. The path also is rich in historic and literary significance. A number of Welsh and English castles stand along the walk, as well as medieval abbeys, churches, historic battlefields, and several iron and bronze age hillforts. These sites include the famed Tintern Abbey, which inspired William Wordsworth to write one of the most important poems of the English language.

From the team's final report

"This trip has been hands-down my favorite experience at OWU and is very high on the list of my favorite things I've ever done. My favorite parts of the TPG trip were the conversations that came from long days of walking. ... Kyle’s love of rocks got me interested in geology, and now I’m taking a geology class. I would not have chosen to take this science course if he hadn’t geeked out about slate on our trip. ... After this trip I've become a huge outdoor and walking enthusiast."
-Gracie Clevenger '21

"To have been in a place that inspired some of my favorite poets, writers, and artists was deeply powerful. ... I benefited a lot from this trip – physically, mentally, and spiritually. ... I had the opportunity to apply my knowledge of farming systems, land use, plant communities, ecosystems, and responses to climate change, among others, along the trail. ... I feel that I am stronger in my own identity and have a greater sense of self-reliance. I am invigorated with a desire to live fully and honestly."
-Peyton Hardesty '20

"I was able to better understand subjects of various backgrounds such as environmental concerns and English literature. I was also able to solidify my background in geology with the studying that I did before and during the trip.... With the combination of professional, personal, and academic development, I can confidently say that this theory-to-practice grant has had a lasting effect on me, as well as on my outlook on the world."
-Kyle Hogan '20

"The ability to experience the landscapes described by William Wordsworth, Dylan Thomas, and Samuel Coleridge was one I will never forget. ... To read great poetry about nature while looking on the very landscape which had inspired it is an incredible experience. Elements of the poems which had previously been overlooked emerge and further enrich the poems’ meaning. ... my TPG trip to Wales was one of the greatest educational experiences of my life, and I will never forget it."
-John Keller '20

The view of Tintern Abbey from Devil's Pulpit.

The view of Tintern Abbey from Devil's Pulpit.

High on a scree during an incredible day of walking, June 27.

High on a scree during an incredible day of walking, June 27.

A narrow path, a steep scree, an amazing view, June 27.

A narrow path, a steep scree, an amazing view, June 27.

Peyton sitting on the west side of Jubilee Monument, out of the stiff wind.

Peyton sitting on the west side of Jubilee Monument, out of the stiff wind.

John feeling a strong wind atop an Iron Age hill-fort.

John feeling a strong wind atop an Iron Age hill-fort.

John, in front, celebrates the site of Prestatyn.

John, in front, celebrates the site of Prestatyn.

Gracie and Kyle looking east over the English countryside.

Gracie and Kyle looking east over the English countryside.

Students on the Offa's Dyke team, from left, Gracie, Kyle, John, and Peyton.

Students on the Offa's Dyke team, from left, Gracie, Kyle, John, and Peyton.

Looking back over the scree we had just crossed and Welsh hills to the southwest on June 27.

Looking back over the scree we had just crossed and Welsh hills to the southwest on June 27.