Ohio Wesleyan faculty share their thoughts on lessons they've learned from 2020 and how they hope we can move forward to a better world in 2021. 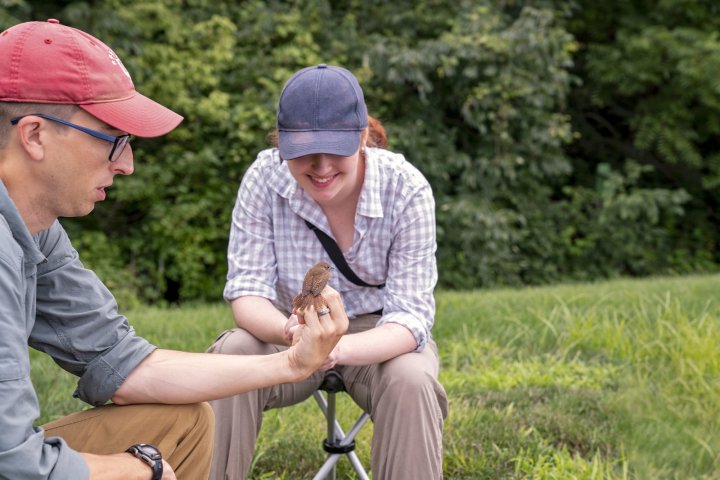 If all the humans suddenly stayed in their houses and kept to themselves, would nature take notice? This question is one that I never expected to answer, but 2020 has been full of surprises.

In March, various state and local governments instituted stay-at-home orders to control the Covid-19 pandemic. Our lives and routines were upended, and the ripple effects of these lockdowns were far reaching, even extending to the natural world. As normally busy streets fell silent, city soundscapes were transported back in time to an era before noise pollution proliferated. Both the birds and scientists were ready to respond.

For decades, scientists have been studying the effects of noise pollution on animal communication and a number of consistent observations have emerged. In cities, most of the noise is low frequency (pitch) like the hum of a car engine. As traffic increases, so does the amplitude (loudness) of the noise. This situation creates a problem for city dwelling animals that use sounds to communicate. For example, when two people are talking beside a noisy street, they are forced to yell to be heard over the surrounding din. The same is true for animals like songbirds that use sounds to attract mates, repel rivals, warn others of predators, and generally share information.

In order to be heard over the low frequency noise of cities, birds will sing louder, at higher frequencies that do not overlap with the noise, and at different times of day when the noise is reduced (e.g. before or after rush hour). Because singing is a behavior, some birds can change their loudness or frequency at will depending on how much noise is present. As noise pollution has increased over time, this vocal flexibility allowed some birds to adjust to urban soundscapes and avoid being excluded from noisy cities.

One question that has intrigued scientists is whether urban birds rely solely on flexibility in their singing to communicate effectively or whether urban soundscapes have caused more permanent shifts in how birds sing. Exactly how might that occur? About half of all bird species learn their songs by imitating adults in a manner strikingly similar to how humans learn to talk. In cities, the adult songs that are easiest to hear are louder and higher frequency, so young birds will be more likely to learn those louder, higher pitched songs. The young birds that are best able to imitate the songs that transmit effectively will attract more mates, make more offspring of their own that will also sing those same songs, and a more permanent change in song could occur in the city birds. This outcome would be evolution by natural selection, and we have plenty of evidence that urban environments are driving rapid evolution in other traits.

To differentiate between these two hypotheses (flexibility v. evolution), scientists need to run experiments that manipulate the noise that birds experience and observe whether their songs change. The only way to realistically test these hypotheses in nature would be to convince cities to decrease their noise and observe how the birds respond. In a normal year, such a request would get you laughed out of the room, but the Covid-19 lockdown last spring provided the perfect opportunity to run this experiment, and a group of scientists led by Dr. Elizabeth Derryberry made the most of it.

Dr. Derryberry’s team had previously measured noise levels in the San Francisco region and found that white-crowned sparrows in the city sang louder and with higher minimum song frequencies. Normally, the noise levels in San Francisco are three times higher than noise levels outside the city. During the Covid-19 lockdown, however, noise levels were statistically indistinguishable between the city and rural areas. The authors estimated that San Francisco had not been this quiet since the 1950s! In response, the city birds also reversed course and sang quieter songs with lower minimum frequencies.  This result beautifully illustrated that the louder, higher songs in the noisy city were the result of behavioral flexibility, and it provided hope for conservationists that some of the changes caused by noise pollution are not permanent and can be easily reversed.

The next question is whether the results of this single study apply to all birds or whether these white-crowned sparrows could be an exception rather than the rule. My research lab at Ohio Wesleyan studies the songs of another closely related sparrow called the dark-eyed junco. In the 1980s, a population of juncos colonized the campus of the University of California, San Diego (UCSD), which is bisected by a number of noisy roads including the San Diego Freeway. This population of juncos exhibits one of the largest increases in minimum song frequency ever measured in an urban bird population, so they are an ideal subject for investigating how and why these songs are so different.

Well before the pandemic, I worked with a group of collaborators to conduct a common garden experiment that allowed us to test whether the higher frequency songs of the UCSD juncos were also caused by behavioral flexibility. We captured recently fledged juncos at UCSD and also at a quiet rural site nearby and transported them to separate but identical aviaries at Indiana University in Bloomington, Indiana. The aviaries were quiet, and the birds developed normally and started singing during their first spring in captivity. To our surprise, the urban birds still sang songs at significantly higher minimum frequencies than the rural birds despite the fact that both populations experienced zero traffic noise in the common garden environment.  Unlike the San Francisco sparrows, the UCSD junco population appears to have evolved higher frequency songs that are more permanently shifted. Whether the juncos are also singing louder songs is something we were unable to measure in our study.

Collectively, these studies emphasize the importance of replication in science and highlight how in nature there are often multiple paths to reach the same endpoint. Louder and higher pitched birdsongs now permeate our cities, but some species achieve them through short-term behavioral flexibility that is easily reversed while others have evolved more permanent shifts.

The Covid-19 pandemic has been an unprecedented disruption to human life, but human-induced changes to the environment have created unprecedented disruptions to literally all other life on Earth. Increased noise is only one symptom of a larger pollution problem that is a defining issue for our entire species. Although juncos and white-crowned sparrows were able to adjust or adapt to overcome this pollution, not all species have been as fortunate.

This pandemic has been a painful reminder that humans are not separate from the web of life both in our effects on other species and how even something as small as a virus can wreak havoc on our health and well-being. Moving forward we have to decide whether we want to emulate a virus in our interactions with other species or whether we want to protect biodiversity, maintain a livable climate, and ultimately save ourselves.

Dustin Reichard is an Assistant Professor of Zoology. His research focuses broadly on the evolution of animal communication and sexual selection with a particular emphasis on birds. Watch his i³ lecture "On the Origin and Evolution of Genitalia."