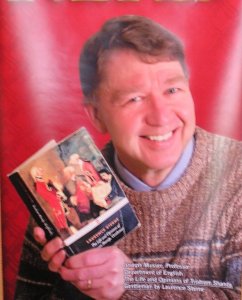 Joseph Musser retired from full-time teaching in 2014. He served for 23 years as chair of the English Department. He was president of Ohio Wesleyan’s Phi Beta Kappa chapter for many years, and from 1989 to 1992 he was the Spencer Professor of Literature. In 1982 he received the Shankland Award for the Encouragement of Teachers, in 2010 the Bishop Herbert Welch Meritorious Teaching Award, and in 2014 the Daniel E. Anderson Award for Service.

He has taught courses in eighteenth-century British literature, the novel, comedy and satire, the English malady, British images of America, and crime in literature. He has also taught many nonfiction writing courses, including freshman writing, “Writing Essays,” “Elements of Style and Rhetoric,” and a nonfiction-writing workshop. He has published articles on William Cowper, Sir Joshua Reynolds, and Thomas Kuhn’s theory of scientific revolutions. In addition to presentations on eighteenth-century literature and culture, he has spoken on professional issues like plagiarism, curriculum revision, and job searches.

Mr. Musser is also a musician. He has been organist-choirmaster of churches in Schenectady, NY, Charlottesville, VA, and Lexington, KY, before moving to Delaware, where he has served as organist at the First Presbyterian Church for over 30 years. He has given numerous organ recitals as well recitals on a harpsichord that he built in 1972.

Mr. Musser’s compositions include organ chorales and partitas, anthems, a cello sonata, a recorder quartet, and several piano and woodwind trios. He wrote two processionals for organ, brass quintet, and timpani for the inauguration of Ohio Wesleyan’s president, Rock Jones (2008). In 2015 he was commissioned to write an organ composition celebrating the 130th anniversary of the Namdaemun Presbyterian Church in Seoul, South Korea, which traces its founding to Dr. Horace Allen, a medical missionary from Delaware, Ohio, as well as an Ohio Wesleyan alumnus. Mr. Musser performed the composition in Seoul in June 2015.