"I tell my students that a work of art exists in its culture the way an organism exists with and interacts with its environment. Works of art are both reflections of and participants in the formation of the culture that produces them. My approach with students is a mix of serious scholarship, informality, and humor. I try to figure out what they need to do to achieve their dreams; what they need to make the most of their talents and abilities." 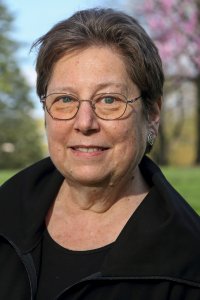 The primary art historian of the department, Carol Neuman de Vegvar joined the faculty in 1988. She taught previously at Skidmore College and Union College in New York. A medievalist, she also teaches Classical, Renaissance, Baroque, and Islamic art.

She has lectured and published internationally on early western medieval art, and she serves as consultant for several museums and collections in England.

My research primarily concerns the art of Anglo-Saxon England and Ireland in the early medieval period. My work raises questions of meaning in context, of the range of audiences of early medieval art and the associations that different groups of viewers and users brought to the structures and objects that survive from this era.

I am interested in differences of viewpoint, both literal and metaphoric, between ecclesiastics and laity, men and women, the literate minorities of church and court and the larger agrarian population. I apply this approach to works across several media: ecclesiastical architecture, manuscript illumination, metalwork and sculpture.

My long-term project over the past decade has been on drinking horns and their social contexts in the early medieval British Isles.

I am interested in the role of these vessels in feasting practices and in hospitality as a first stage in an escalating cycle of reciprocity that was thought ideally to bind together different levels of a vertically structured elite with ties of mutual loyalty and obligation.

The project also entails a catalog of the extant metalwork horn fittings from the British Isles in the period from the Roman to the Normans; the horns themselves rarely survive as the keratin of which natural horn is constituted is fugitive in most archaeological contexts.

This project will be published as a book, currently in the writing stage, to be entitled Drinking Horns and Social Discourse in Early Medieval Britain and Ireland; 500–1100.

Research on this project, as well as others referenced in my list of recent publications, has been generously supported by Ohio Wesleyan University under the aegis of the Thomas E. Wenzlau Presidential Discretionary Fund.