The Merrick Lecture was founded by Frederick Merrick, Professor and Second President of Ohio Wesleyan University. They are in the area of “experimental and practical religion.” It constitutes the oldest running series at the University.

Each year the Merrick Lecture Series brings to campus a renowned scholar of religion or philosophy for talks and for one-on-one discussion with students. In the past decade, speakers have included Gene Outka, Michael Novak, and James Charlesworth. Through additional University programs, prominent lecturers from France, Yugoslavia, and the United States have also visited our campus. Also, various lecture series at the Methodist Theological School in Ohio provide opportunities to hear eminent theologians. 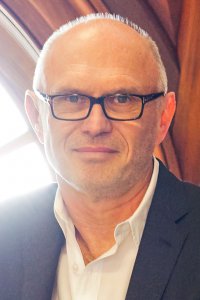 Dr. Miroslav Volf, the Henry B. Wright Professor of Theology at Yale Divinity School and the author and editor of over 20 books and 100 scholarly articles, will explore what kinds of lives are worthy of our humanity in his lecture. We are deeply attracted to the idea of lives worthy of our humanity yet find it difficult to pursue such a life. We spend most of our lives working, in the broad sense of the term, to acquire various means for life without having a clear sense to what end these means should be used. He imagines the lecture as an invitation to pursue a life worth living — and to find meaning in our work by aligning it with the pursuit of a life worthy of our humanity.