The Student Board is a group of students elected by the religion majors and minors and the pre-theology majors to represent their interests. Elections occur every spring, with the winners typically being announced at the spring picnic. The student board is the primary liaison between the students and the faculty. The responsibilities of the board entail (1) administering evaluations of department faculty who are being considered for merit, retention, and/or tenure; and (2) organizing student events, discussion, etc. related to the academic study of religion. From time to time, the department calls on the student board for other assistance, as when it conducts an academic search.

Beeghly Library is among the largest liberal arts college libraries, and also provides excellent electronic linkages to the Ohio Five and other library networks. Beeghly's more than 480,000 volumes include many uncommon and valuable 19th-and early 20th-century works on religion, Bible, and theology, as well as a strong continuing collection of periodicals. The library of the nearby Methodist Theological School in Ohio contains some 125,000 well-selected volumes in the special area of religion and christian theological studies, and is open to Ohio Wesleyan students.

You may design an independent study project to supplement other course work. Working directly with a faculty member, students gain in-depth knowledge about a variety of issues and subject matter.

Ohio Wesleyan offers a wide range of study programs in Europe, Asia, and Latin America, many of which involve pursuing individual projects in religion.

Religion classes often visit institutions relevant
to their topics. In addition to trips in the 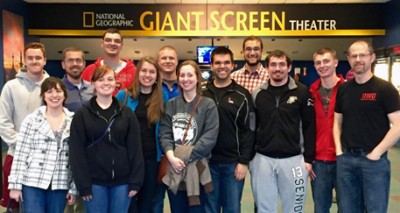 Theta Alpha Kappa is a national honor society for professors and students of Religious Studies/Theology. It was conceived as a college-university learned society at Manhattan College, New York City during the academic year 1976-77. Its prime purpose is to further the study of Religious Studies and Theology at the undergraduate and graduate levels. Its title embraces the three areas of primary concern to students of Religion: God, Humanity, Community. It has more than one hundred fifty chapters at colleges and universities nationwide.

Membership Requirements: Article 111, Section I of the Constitution of 1998 spells out both the types of membership and the requirements each must meet. These requirements are, as that document states, minimum requirements; chapters may, at their own discretion, establish additional or higher requirements. In terms of the two basic types listed above, these requirements include the following:

Undergraduate students have a) completed at least three semesters (or five quarters) at an institution having a local chapter in good standing, b) completed a minimum of twelve (12) semester credits (or eighteen quarter credits) in courses representing Religious Studies or Theological Studies, c) attained a grade point average of at least 3.5 (B+) in such courses, d) attained at least a 3.3 grade point average (or B) in their total academic program to date, and e) been ranked in at least the upper 35% of their class in general scholarship at the time of induction.

Graduate/Professional students must a) be matriculated in programs of Religious or Theological Studies, b) have completed at least one half of the residency requirements of their current degree program at an institution with a local chapter of TAK, and e) have attained at least a 3.5 (or B+) grade point average in their course work to date.

Honorary inductees/member include a) those holding faculty rank for at least one semester (two quarters) in these disciplines at an institution with a local chapter, and b) other individuals who, at the discretion of the local chapter, are deemed to have established a record of excellence in their own right, and shown consistent support and encouragement of these academic disciplines.