“A 33-year-old woman was on her way to work when a man pushed her into oncoming traffic, sending her sprawling headfirst into the road as a bus was heading towards her; the driver, travelling at about 12mph, swerved at the last second, narrowly missing the victim’s head as she lay inches from the bus’ wheels.” 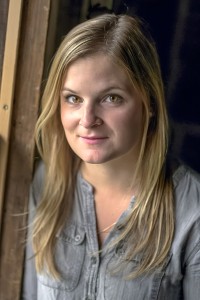 This essay was originally published in Brevity. See Amy Butcher's blog post about this essay here.

An Ohio woman was shot dead while cooking Thanksgiving dinner; witnesses report that at the time of the shooting, she was standing at a kitchen table, preparing macaroni and cheese. The body of a North Carolina woman was found in a shopping center parking lot at dawn. A Texas woman was grabbed from behind and attacked in a “bear hug” after finishing several laps at the Austin High School track. A California woman was found dead and stuffed in a trash bag on a sidewalk. A Pennsylvania woman was found dead in the suspect’s grandmother’s home. A Michigan woman was groped and urinated on while shopping in Kohl’s; a breast cancer survivor who had recently undergone a double mastectomy and reconstructive surgery, she was shopping for new bras when Troy Police say the assailant attacked her, urinating on her back and into her incisions, which were still healing. An eighteen-year-old Pennsylvania teen was shot in the head several hours after her high school graduation by a white male while merging into traffic ten miles from her home and mine. A Michigan woman walked into a hospital and reported to nurses that she’d being sexually assaulted, beaten with brass knuckles, imprisoned for three days and transported to have sex with a man for money; the woman reported that she thought the man was a friend. Police would later describe hers as some of the worst bruising they’d ever seen.

A woman in her fifties was knocked to the ground, dragged into a field and raped in populated Rosental Park; during the assault, she was kicked and punched so hard in her face that she had to undergo emergency surgery, and police responded to the crime by telling a local newspaper that women should reduce their personal freedoms by jogging in pairs rather than assume they will be protected. A 63-year-old woman was found dead in her bedroom at 11 a.m.; police report her head was bashed in and her husband, who had bite marks on his hand, told a neighbor, “I know I’m going to jail.” A 33-year-old woman was on her way to work when a man pushed her into oncoming traffic, sending her sprawling headfirst into the road as a bus was heading towards her; the driver, travelling at about 12mph, swerved at the last second, narrowly missing the victim’s head as she lay inches from the bus’ wheels. A woman out for a walk was forced into a car by a man with a Caribbean-sounding accent; he drove her to a secluded parking lot at gunpoint and then sexually assaulted her. A woman was thrown to the ground and kicked by two men in a parking lot. A twenty-two-year-old girl from my hometown was murdered by strangulation and blunt force trauma one week after transferring to Temple University; she was moved to three separate locations via Lyft first in a blue plastic storage container and then a duffel bag before police identified her attacker, a 29-year-old male who was found cleaning blood from his apartment, his cousin later testified.

I hate feminists, he says to me. The love of my life. I hate that you count yourself among them. A bunch of angry women who hate men. You’re hurting an entire gender.
---
Amy Butcher is an Assistant Professor of English. Her recent essays have been published in Granta Magazine, Harper’s, The New York Times, Lit Hub, and others. Her first book, Visiting Hours, earned starred reviews and praise from The New York Times Sunday Review of Books, NPR, The Star Tribune, Kirkus Reviews, Glamour, Cosmopolitan, and others.