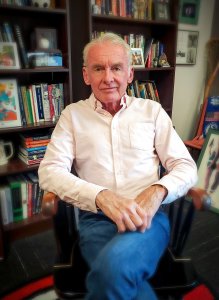 Professor of Health and Human Kinetics

John “Jay” A. Martin came to Ohio Wesleyan in 1977 from The Ohio State University. Earlier, Martin lived in Germany, where he served on the staff of the Volleyball Pavilion at the 1972 Olympics, was athletics director at the American International School at Dusseldorf, played professional basketball and played soccer for the Kaiserwerth Club, in addition to being director of sport at the Munich YMCA, where he coached soccer, volleyball, and basketball.

In 1985, Martin became OWU athletic director and held that position until 2004. He was chair of physical education from 1981 to 1996. As a professor, he currently teaches Introduction to Sports Management and Management for Sport/Athletic Administration. To read an account of Martin’s many coaching accomplishments since coming to Ohio Wesleyan, check his corresponding Athletic Department web page.

Beyond coaching, Martin also has served soccer with a term as president of the National Soccer Coaches Association of America as well as a six-year stint on the NCAA Division III selection committee, including four years as committee chair. He has been a color analyst of the Major League Soccer’s Columbus Crew for nine seasons. In addition, he took over as editor of the NSCAA’s The Soccer Journal in January 2003, becoming the publication’s third editor since its establishment in 1950.