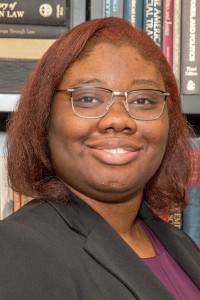 Assistant Professor of Politics and Government

Dr. Mack teaches Media and Politics, Power and American Politics, and Voting and Elections in the US.

As an undergrad, she was a Mellon Mays Undergraduate Fellow and a Ralph Bunche Summer Institute scholar.  Both programs identify minority students interested in pursuing careers in the professoriate and provide encouragement and support to do so.  She also served on the President’s Commission on Race and Ethnicity and was a charter member for Emory Quest Scholars – a social and advocacy group for students who received the Questbridge College Match Scholarship to Emory University.  During her time as a graduate student at Ohio State, she was involved with minority and diversity initiatives in the Political Science department and was a Fellow at the Bell National Resource Center on the African American Male.

A Southern transplant, Brianna is a lover of pop culture, animation, and video games.  She enjoys playing video games, watching cartoons and anime, reading historical fiction and fantasy books, going to concerts, and exploring the Midwest with her family and friends.

Dr. Mack’s research interests are in American Political Behavior, Political Psychology, and Race and Ethnicity.  Her interests focus on the political behavior of racial and ethnic minorities, particularly how does one’s identity influence his or her political attitudes.  Her dissertation examined the ways in which racial group identity and political knowledge shape African Americans’ responses to political messages.  She is currently working on a project examining the relationship between community discussions on police violence and African Americans’ attitudes towards police officers and another project examining the relationship between a candidate’s perceived marital status and his or her viability as an elected official.