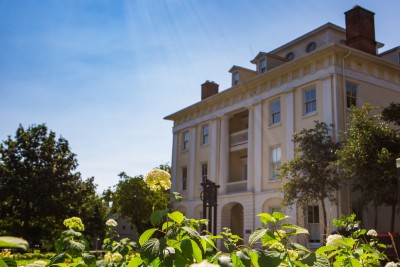 Elliott Hall, built largely of native hardwoods, oak and walnut, has withstood the ravages of time since 1833. Now a historical landmark, it has survived a move in 1891 from its original location where University Hall now stands, and also a dangerous fire in 1903.

Having served briefly as a luxury hotel, it became the home of Ohio Wesleyan in 1842, and was the university's only building for about ten years. Rapid growth of the student body, especially after the coming of the railroad in 1852, necessitated two more buildings, Thomson Chapel and Sturges Library. Then, for 35 years, the former "Mansion House" hotel became "Old North" in the line of buildings facing Sandusky Street.

After being moved to its present location it became the home of the physics department and later also of the new department of education. In 1958-1968 these departments were replaced by history, politics and government and sociology/anthropology.

The exterior of the building was changed from white cement to weatherboarding in 1848. Recently the old weatherboarding was replaced by new redwood. The interior was renovated and remodeled in 1958 and was completely refurbished and modernized in 1990.

Let me ask the old students to visit Elliott Hall today. How wonderful its associations! In it Thomson wrote the lectures that thrilled and charmed all the earlier classes. It is there that Merrick evermore emphasized life as a probation. There McCabe, in words of fire, told us of the privileges and possibilities of life. There Williams, as teacher, facile princeps, strove with all possible intensity and fidelity to convert the raw material into polished shafts. – William F. Whitlock, 1942

Above taken from the Rededication of Elliott Hall program, October 20, 1990.